The Leopards of Akole - 5

The earlier stories can be read at:
1) Man-Animal Row: Study holds vital clues
2) Akole's leopards have hardly jumped humans
3) How did the leopards get to Akole?
4) Conflict in Junnar is due to relocation

Vidya Athreya is the principal investigator of the ongoing project to study and understand the presence of leopards and their behaviour in human-dominated agricultural landscapes of western Maharashtra. Akole taluka in Ahmednagar district is the present field site of her project that has been going on for over two years. These are excerpts from an interview discussing various dimensions and challenges of her work. 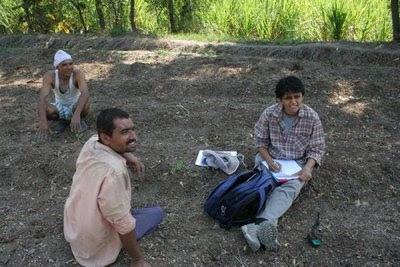 Vidya Athreya (on the right) talking to farmers in Akole to understand their perceptions of the leopards in their farmlands (Pic: Pankaj Sekhsaria)
How did you get interested in studying the leopards of western Maharashtra?
It began in 2003 when we moved to the Giant Meterwave Radio Telescope campus of the National Centre for Radio Astronomy in Narayangaon. My husband, Ramana Athreya is an astronomer. This region was most affected by the leopard human conflict. There were attacks every two weeks. Many leopards that were captured had not actually attacked humans, but had been sighted or had killed livestock. I was fascinated and keen to understand how these big cats lived in croplands, close to human settlements without any significant problems.

Your biggest challenges in your research
On the field, it is the large number of people you have to deal with. A lot of time and energy is spent talking to people and explaining what we are doing. I have also been lucky to get support from the forest department, both at the state and the local level. Project supervisors Ulhas Karanth and Sukumar have also given me complete freedom in my work. The biggest challenge has been to get the media interested. A leopard living without attacking people is not what many want to write about. They are interested in writing about it when there is a problem. This is perhaps, causing the greatest harm to the conservation of this species.

What are the larger lessons?
There are three important ones:
Significant wildlife exists outside our sanctuaries and national parks (protected areas); we have a very unique situation in India where local people are still extremely tolerant of wildlife in their surroundings and conservation in India is viewed entirely through a protected area lens.
Now the conservation community has to start working with the local people. Also their tolerance is diminishing rapidly due to many factors and it would end up being a great loss.
We have no clue that so much wildlife exists outside protected areas and management decisions are generally inappropriate for these non-protected areas or non-forest areas.

Your experience with the local people
I have thoroughly enjoyed my work. The India I knew seems so disconnected from rural India. Yet one can sit in their house, chat about things and have a cup of tea. That has been amazing. The other thing is how politically powerful rural India is compared to urban areas (with the exception of Delhi, perhaps) and how politicians use all kinds of means to get their votes. That has been an eye-opener

Insights from interacting with local people
A lady told me that she had been seeing me coming regularly for my camera trapping work and was interested in the animals and had grown curious about the leopards herself. But, she said, she did feel occasionally scared as she had a little son.
Now, I knew that there was a leopard moving around in the vicinity as I had seen pugmarks just behind her house. I almost could not sleep that night wondering what would happen if the boy was attacked 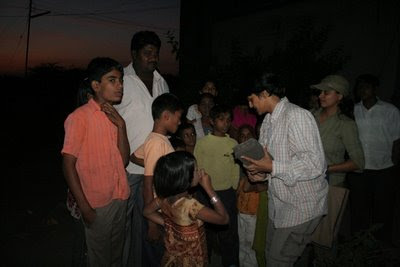 Vidya explaining the workings of the camera trap to gathering of village children (Pic: Pankaj Sekhsaria
Your family's reactions
The toughest part has been leaving behind my eight-year-old daughter to go out into the field. But both she and my husband have been remarkably supportive and I am grateful to them. My daughter asked me why leopards do not attack people who are studying them.

Any particular challenges
The biggest challenges have been from a few male colleagues who appreciate what I am doing, but cannot handle the fact that a woman is doing this, doing it well and alone. That I have to face this in this day and age, although not surprising in our intrinsically conservative male dominated society, rankles.

The response from government agencies
The forest department has been of great help from the beginning. Be it the local staff or the senior officers, they have been very appreciative and have always shown great interest.

Your next step in studying the leopards
One of the biggest tasks before me is to educate farmers, local and state-level media, urban public, managers and policy makers about the complexities. We want to use global positioning system collars on the leopards to see how close they come to humans. We know they have many opportunities to attack, but don't and we want to understand this better.

The Central Zoo Authority (CZA) has approved a proposal of the Maharashtra State Government for setting up leopard safaris in three different parts of the state. These are to come up near Belwandi in Ahmednagar district, at Manikdoh in Pune district and at Sanjay Gandhi National Park, Mumbai.
60 leopards captured from various parts of the state will be rehabilitated in the safaris, the first of which will come up in the Ahmednagar district. The state government expects to spend Rs. 10 crores for the establishment of these safaris.
Posted by PANKAJ SEKHSARIA at 4:23 PM

would it be possible to reach out to Vidya Athreya for a story for rediff.com?

You are doing really a GREAT job. I am also very enthusiastic in wild life activities, whenever if you required my help, please drop me a mail at sarveshbhalerao@gmail.com

I am from Narayangaon in Junnar taluka and acquainted with these leopard facts including one face to face encounter. The leopard kept staring at me and the suddenly vanished in the sugarcane field. It probably could not decide as to what I was since I was on my bike with a black helmet-black glass, thick black wind-cheater and black jeans. I stood there motionless so that the leopard gets all the more confused as it could not see my eyes and it worked.