The Western Ghats are, without doubt, one of the richest eco-regional systems in the entire subcontinent. Straddling six states from Gujarat in the north to Kerala and Tamil Nadu in the south, the 1,600-odd km long mountain range extends from the River Tapti in the north to Kanyakumari at the southernmost tip of the Indian landmass. They are home to a wide diversity of life just as they support innumerable human communities and cultures. It is a mountain range with a history of nearly 50 millions years, with only the last 12,000 to 15,000 years having seen the gradual entry here of the human species.

The beauty of the landscapes here is unmatched, endemism in the forests is high and nearly 250 million people living in peninsular India are nourished by the many rivers that originate here. The forests here are also home to more than 300 globally threatened species including rare and unique ones like the Malabar torrent toad, the Nilgiri langur, Wroughton’s free-tailed bat, the Nilgiri laughing thrush and many species of caecelians, the limbless amphibians. Conservative estimates put the number of microorganisms, plants and animals here at about 15,000, 40 per cent of which are found nowhere else in the world.

It is with good reason that the ghats have been recognised as one of the world’s top 34 biodiversity hotspots and a large number of protected areas dot their length. There are nearly 60 sanctuaries and national parks here, ranging from the tiny 4 square kilometres Karnala Sanctuary in the Raigad district of Maharashtra, to others that extend over hundreds of sq km like the Bandipur NP in Karnataka and the Indira Gandhi Wildlife Sanctuary in the Anaimalais of Tamil Nadu. The region has over 60 important bird areas and also a number of areas designated as tiger and elephant reserves for the protection and conservation of two of the subcontinent’s most charismatic mega fauna.

This richness and wealth notwithstanding, the Western Ghats face a range of serious and complex challenges: there is unregulated mining in large parts; a number of rivers have been (or continue to be) dammed resulting in the loss of riverine ecosystems and the submergence of pristine forests; a rapidly growing network of roads and rail lines is fragmenting the patchwork of existing forests; continued habitat loss due to urbanisation, agriculture and plantations is leading to an alarming rise in human-wildlife conflicts; and tribal communities like those in Nilgiris continue to face increased marginalisation, loss of access to resources and livelihoods. It is estimated that only a third of the mountain range is still under natural vegetation and this too, is highly fragmented and completely degraded. For the ghats that are spread over an area 1,60,000 sq km and support millions of people and heads of livestock, this is only to be expected.

The Western Ghats is perhaps the most-studied eco-system in the country, and has had the maximum number of initiatives and efforts towards conservation directed at it. The mountain range has also been lucky in that there have always been vibrant local communities, NGOs, researchers and officials who have continued to engage with the complexities and work with the challenges of this unique system.

There have been, in recent times, a number of small, localised efforts that are

extremely heartening: children in schools in the vicinity of the Bhimashankar Wildlife Sanctuary in Maharashtra demanding that plastic be banned from within sanctuary limits; the creation of 12 new Important Bird Areas in Kerala; efforts to bring down deaths in traffic accidents inside forest areas either by banning traffic like in Bandipur and Nagarhole National Parks or by strictly regulating it in many other forests areas; new public private initiatives to secure corridor forests so that animals can move without hindrance and a number of awareness and environment education activities across the entire region.

Significantly, there are a range of programmes that have an appeal and relevance cutting across state and political boundaries. A large conservation research and action initiative is being implemented under the aegis of the Critical Ecosystem Partnership Fund; the iconic Save Western Ghats Movement that was initiated two decades ago is on the way to being revived; a new Nilgiri Natural History Society has been formed; the creation of the Sahyadri Ecological Authority has been mooted and the ministry of environment and forests’ expert panel on the Western Ghats has been working to ‘assist in the preservation, conservation and rejuvenation of this environmentally sensitive and ecologically significant region.’

In another commendable development a few months ago, the minister of environment and forests, Jairam Ramesh, organised a special meeting of 43 Members of Parliament from the 51 districts which have the Western Ghats running through them.

It has been argued often that if political constituencies had been carved out on ecological or even eco-regional criteria, politics would have been different. Ecological systems, be they mountain ranges, river systems or the coast often get looked at in a piecemeal manner. The integrity of what is a single unit is completely overtaken by other considerations and the consequences have only been adverse. The minister’s initiative could well be the starting point of a better, more holistic approach.

To say however, that things will suddenly be better now in the Western Ghats, would be putting the cart much ahead of the horse. The challenges, needless to say, are daunting. Speaking at the inaugural session of the 13th Biennial Conference of the International Association for the Study of the Commons in Hyderabad in the first week of January, Ramesh argued that the country will have to make trade-offs between attaining 9-10 per cent economic growth and maintaining an ecological balance. The more pertinent question is being asked by those who are being ‘traded off’. In the Western Ghats, this has been most starkly visible in the controversy surrounding the nuclear power park at Jaitapur in Maharashtra. Local people here are strongly opposed to the project that they claim will destroy their livelihoods as also the environment that sustains them. There are many other such examples.

It is in this extremely complex and sometimes charged context that the conservation initiatives have to deliver. It is only with this mixture of apprehension and hope that the Western Ghats can look towards the future. 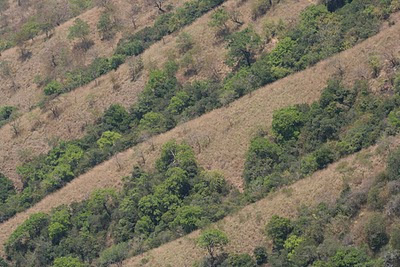 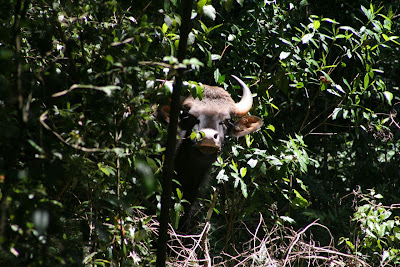 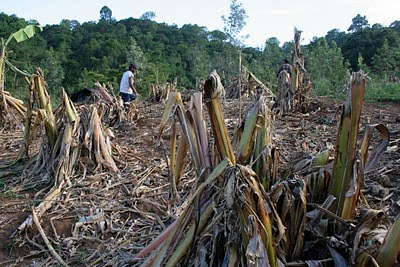 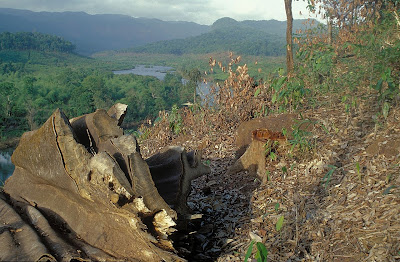 Tree felling in the catchment area of the dam on the Sharavathi river in Uttara Kannada, Karnataka 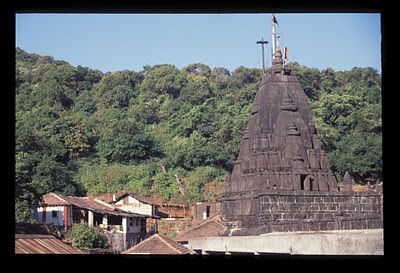 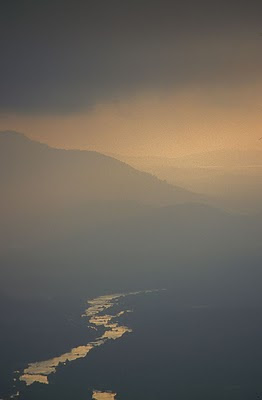 River Aghanashini as seen from the crest of the Western Ghats in Uttara Kannada district, Karnataka

— The writer is an environmental researcher, writer and photographer. psekhsaria@gmail.com
All photos by Pankaj Sekhsaria
Posted by PANKAJ SEKHSARIA at 12:34 PM 3 comments: Links to this post