Dear Friends,
Below is the list of contents and editorial of the new issue of the Protected Area Update (Vol XVII, No. 5, October 2011, (No. 93). If you would like to receive the entire newsletter in its soft copy form, please write to me. Please also do forward to others who might be interested in the Update.
Back issues of the PA Update can be accessed from www.kalpavriksh.org
I would also like to take this opportunity of requesting readers and well-wishers to support the PA Update through donations and subscriptions. All help, big or small is much appreciated and very welcome.

LIST OF CONTENTS
EDITORIAL
Giving the fruit bat it’s due

JHARKHAND
- Special protection force for Palamau TR; no arms to be provided

BHUTAN
- Bhutan gets US $ 2.25 million from the World Bank for wildlife conservation

PERSPECTIVE
Environment in the Marathi Press: Notes from a young freelance journalist

Giving the fruit bat it’s due

Wildlife conservation in India, our wildlife conservation laws and policies are certainly not short of anachronisms of various kinds. One that stands out most prominently is the status accorded to fruit bats – that of vermin in the schedules of the Wild Life Protection Act (WLPA) since it’s inception in 1972.
It is indicative not only of our anthropocentric attitude (any thing causing economic or other damage to humans is to be exterminated), it also betrays an unacceptable ignorance of the actual role these creatures play in nature. It has been believed for long that fruit bats cause considerable damage to horticultural crops, but research over the years has shown that they actually do more good than harm. 10 of the 13 species of fruit bats live only in forests and do not visit fruit orchards where they might cause any damage. They play a very important role in pollination and seed dispersal and are a vital cog in the forest regeneration mechanism. A couple of them are, in fact, even endangered and have been included in IUCN’s red data list.
That it is not known beyond the small circle of bat enthusiasts that the United Nations has declared this as the ‘Year of the Bat’ is indicative of how much (or little) concern there is for these creatures. It is also only fitting, then, that this group of bat conservationists has launched an effort to set the record straight and get the situation corrected (see National Stories from India in this issue of the PA Update). More than a year ago, prominent bat experts associated with the IUCN had written to the Indian Ministry of Environment and Forests (MoEF) pointing out that India is the only country in the world where the fruit bat is considered a vermin and had requested for this to be changed. The editorial of the latest issue of Small Mammal Mail, a newsletter dedicated to the ‘most useful but most neglected small mammals’ (www.zooreach.org) like bats and rodents has also made an impassioned plea to rid rodents and bats of the vermin tag. It notes that the relevant government agencies have been addressed on numerous occasions in the matter, but nothing has come of it.
This is, indeed, unfortunate and it’s high time that this much maligned but hugely useful and harmless creature is given it’s due. The least we can do is desist from blaming it for damage it is not responsible for!
---

Ideas, comments, news and information may please be sent to the editorial address:

Publication of the PA Update has been supported by


Donations from a number of individual supporters.

Information has been sourced from different newspapers and
http://indiaenvironmentportal.org.in
Posted by PANKAJ SEKHSARIA at 5:09 PM No comments: Links to this post


Dastkar Andhra brings cotton handloom fabrics from DAMA and readymade garments from daram in an exhibition at Apte Hall, Pune from September 22-24, 2011 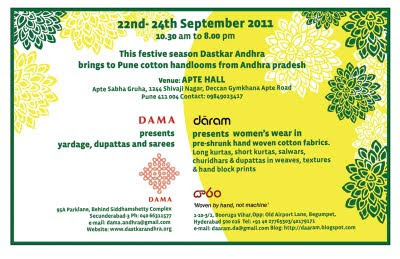 Posted by PANKAJ SEKHSARIA at 11:12 PM No comments: Links to this post