BBC Does a Columbus -

- finds the lost tigers of Bhutan


On September 20, BBC published a report in its Earth News section of its web edition that has had the global wildlife and conservation community abuzz with excitement. In the article, ‘Lost tiger population discovered in Bhutan mountains’, editor Earth News, Matt Walker, described with unconcealed enthusiasm the expedition where the BBC team “left (camera) traps at an altitude of between 3,000m and 4,100m” in the Bhutan mountains for many months and returned eventually with footage of two adult tigers—one male and one female. “The discovery,” the report says, “has stunned experts, as the tigers are living at a higher altitude than any others known and appear to be successfully breeding.” Veteran cameraman Gordon Buchanan, who was on the expedition, was reportedly moved to tears when he saw the footage.
In a world starved of good news about wildlife, the global media lapped up this discovery. The BBC claim was relayed and published widely with no questions asked at all. It didn’t occur to anyone to ask what a ‘lost tiger population’ meant? When was it lost for it to have been discovered now? The BBC team had got the footage for sure, but how did they know where to put up the cameras in the first place?
The report does acknowledge the Bhutan Ministry of Agriculture and Forests and Forest Guard Phup Tshering, but the heroes of the entire episode are, of course, the BBC crew and conservationist Alan Rabinowitz, President of conservation organization, Panthera, and leader of the expedition. Walker credits Rabinowitz with having “suspected that tigers may also be living at higher altitude, following anecdotal reports by villagers suggesting that some were roaming as high as 4000m (13,000ft).”
The matter begs serious questioning: if local people had already known of the presence of the tigers, how can anyone claim their discovery? Why is it that local knowledge and understanding continues to be secondary to television crews and scientists?
BBC’s claim is not questionable only on semantics grounds and on its politics of lost, found and discovery, but also from the fact that there is considerable ‘hard’ evidence of the presence of tigers at high altitudes. For instance, a 2001 report of the World Wildlife Fund (WWF) – Bhutan Program says that in “September 1999, a camera trap set up by a wildlife survey team captured a tiger at 3,400 meters, the highest altitude ever recorded for a tiger. In its note on the ThrumshingLa National Park, the Bhutanese Tourism Ministry notes: “the park made news in the year 2000 when a WWF-supported survey team captured a camera-trap image of a tiger at 3,000 meters – the first photographic evidence that the magnificent creatures exist at such high altitudes.” More recent documents like The Tiger Action Plan for the Kingdom of Bhutan 2006-2015 published by the Nature Conservation Division of Bhutan’s Ministry of Agriculture along with the WWF Bhutan Program and the May 2010 National Tiger Recovery Program Summary of Global Tiger Initiative also note that the tiger in Bhutan inhabits ranges from an altitude of 100m to 4100 m about sea level. Another camera trapping study conducted in 2008 in the Jigme Dorji National Park found both pugmarks and pictures of tigers at an altitude between 3,700 and 4,300 meters above sea level. Even the web page of IUCN’s Red List of threatened species observes that tigers have been recorded in Bhutan upto 4,500 meters above sea level.
All of this has been completely ignored in BBC’s claim and the plethora of media reports that appeared in the wake of this ‘find’ and ‘discovery’. There was one voice of contestation that came, not surprisingly, from wildlife researchers in Bhutan. Not surprisingly, further, this voice has been completely drowned out. The online news site www.kuenselonline.com published a report on BBC’s claim with a title that was as subtle as it was instructive. “Cameras catch big cat at 4,000 m plus”, the headline said, followed by the subtitle “Further evidence of the wide range of the tiger in Bhutan”. The reported noted incisively that Bhutanese wildlife conservationists were not calling it a ‘discovery’ but only more ‘evidence’ to prove that tigers do roam the jungles of Bhutan at an altitude as high as 4,100 m. Sonam Wangchuk, head of the Bhutanese Wildlife Conservation Division noted about their findings of about a year ago: “We’ve found pug marks and droppings (of tigers) at the Jigme Dorji Wangchuck national park. The only thing we don’t have is a footage of them.”
The gulf between the reality on the ground and what has been claimed is too evident to have been missed. There are no lost tigers in Bhutan. There is no way anyone could have found or discovered them.
----
A shorter version of the same story with the title 'BBC does a Columbus' was published in the 'Down to Earth' issue of October 15-31, 2010
http://www.downtoearth.org.in/node/2085
Posted by PANKAJ SEKHSARIA at 7:19 PM No comments: Links to this post

A first of its kind satellite tracking project to monitor leopards in India recently released data of a young male leopard’s remarkable journey from the hinterland to the forests of the Sanjay Gandhi National Park in Mumbai. The leopard that was trapped in a well in the small town of Alephata, in Pune District was fitted with a satellite collar and released in the nearby forests of Malshej Ghat. In the 23 days that followed, the animal walked through agricultural lands, densely populated human habitations, across roads, a railway line and swam across a creek to cover a distance of 120 kms and reach the green oasis in the heart of India’s commercial capital. 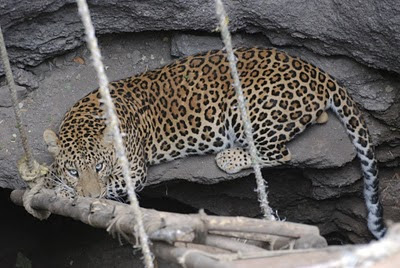 The leopard when it was found trapped in the well. It was collared as part of the research project by the team (below). On the right is lead researcher, Vidya Athreya (Photo Courtesy: Project Waghoba) 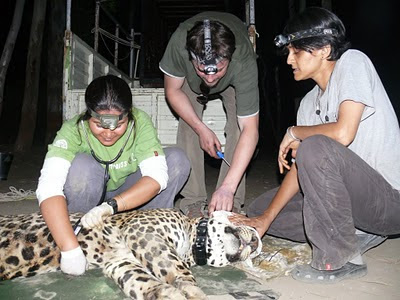 Wildlife biologist Vidya Athreya, who is lead researcher of Project Waghoba (www.projectwaghoba.in) that seeks to study leopard presence and behaviour in human-dominated landscapes, believes that this proof of the leopard’s journey has important policy implications to deal with cases of human-wildlife conflict across India. The first indications of this had been evident to her in 2003, when she started researching human-leopard conflict in the agriculture-dominated landscapes of Western Maharashtra. It is linked to a spate of incidents in the forests of Yawal WLS located in Jalgaon district of Maharashtra. These forests are inhabited by a range of wild animals including large carnivores such as leopards. They have also been dotted with human settlements for a very long time and yet there had been no instances of conflict with the carnivore that is one of the most intelligent and adaptive of wild cats. All this suddenly changed towards the end of 2003. The two-month period from October 31 to December 24 saw six vicious attacks by leopards in the region that had not experienced a single one till then. The attacks stopped only when trap cages were put up and two leopards were caught in them. These were the same animals that had, only a few months ago, terrorised the human population in the agriculture-dominated landscape of Junnar near the city of Pune. Labelled ‘straying’ animals, they were trapped here and as per existing management policy moved 400 km to the forests of Yawal, where they were released back into the ‘wild’.The identity of the leopards, the reason for their presence and the explanation of the attacks lay in a small electronic tag that lay inserted at the base of the tail of these animals. They had been electronically tagged before release as part of a pioneering research project by the Maharashtra Forest Department and assisted by Athreya and wildlife veterinarian Dr Aniruddh Belsare. The rice-grain-sized tag can be read like a bar-code in the supermarket and it was hoped that the tagging would help track the problem animals once they were captured and set free elsewhere. In the case of Yawal, Athreya and Belsare had shown that translocation of the problem leopards was no solution at all; it lay at the root of the problem. The translocation of the animal from the area of conflict had in fact caused the conflict to move to new areas. The animals had taken the conflict with then, and significantly, to an area where it had never existed. The explanation lies in a simple fact of animal behaviour and biology. Translocated animals are forced to negotiate unfamiliar territory and this increases the chance of conflict. The stress encountered during the move itself can also result in an animal becoming more aggressive and problematic. Territorial animals like bears, leopards and tigers have a very strong homing tendency and instinctively try to return to the area from which they have been moved. “In the case of Yawal,” notes Athreya, “one of the problem animals was captured 90 km from its site of release in the direction of Junnar, the town from where it had been brought. ”This was borne out again earlier in June this year, when an elephant from a herd responsible for large-scale damage was captured in the Hassan district of Karnataka. It was moved to the Bandipur National Park but had walked back 70 km towards its home territory within days. In another documented case in 2005, a herd of 20 elephants was relocated from the Hambantota town in south east Sri Lanka to the Yala National Park. One of them was radio-collared by the Centre for Conservation and Research and the Sri Lankan Department of Wildlife Conservation to track the progress of the relocation process. The collared animal, the researchers found out, was back at its original site in Hambantota in a few days time. There is increasing evidence that translocation of what are considered ‘problem animals’ is no solution at all. “Translocation,” says Athreya, “is a procedure commonly used to deal with people or animals which are a problem. It is reactive and involves large amounts of resources. What we require are proactive processes, but these can be devised only after a careful analysis of the problem, be it conflict between villagers and wildlife in protected areas or in croplands.” Modern technology like micro-chipping, use of satellite and radio collars and innovative research projects are for the first time, giving important insights into the hitherto unknown outcomes of translocation projects. — The writer is an environmental researcher, writer and photographer. psekharia@gmail.com

Posted by PANKAJ SEKHSARIA at 7:02 PM No comments: Links to this post