Dear Friends,
I am very happy to announce the publication of a new book and the first that is based on the 18 years of information available in the Protected Area Update.

EDITED by Pankaj Sekhsaria
PUBLISHED by the Foundation for Ecological Security, Anand.
Pp: 300, over 100 line drawings.
Price: Rs. 250 + postage
Write to me at psekhsaria@gmail.com for details of how to procure a copy.
---

For over a decade and a half the Protected Area Update has religiously presented a consolidated account of India’s wildlife and the PA network. Published six times a year, it carries in a tightly edited format, news and information of what is happening in, to and around these national parks and sanctuaries that have been at the core of India’s wildlife conservation strategy.
Now, for the first time, a section of this huge body of information has been re-organised to form a completely new publication – what we have called ‘The State of Wildlife in North-East India - 1996-2011’. Published by the Foundation for Ecological Security, this is an historical account of developments in the PA network in the eight states of the north-east. While the primary unit still remains the individual protected area, the time line has changed from two months of one issue to 15 years that this publication covers.
In following one news item after another about any particular PA we see what happened month after month, year after year; what developments recurred at what periodicity; what were the issues that were important and what was done about them. It is, we believe, an important glimpse into the contemporary history of wildlife conservation in this very interesting part of the country.
And many insights emerge, none more striking than it’s Assam centred-ness. It might be a North East compilation but it might as well be called an Assam compilation. Nearly two-third of the stories are from the state of Assam alone. The others in the region seem to exist only on the margins. Even in Assam, about 50% of the stories are about only one PA, the Kaziranga National Park. This, in turn raises a whole set of questions - What explains this fascination with Kaziranga? Is it really that much more important than anything else in the region? Don’t other parks have a lot that Kaziranga does not? Is it about what is actually happening on the ground, about what the world thinks of Kaziranga or some dynamics of editorial desks and newspaper newsrooms? The answers are not really there, but the ground is laid for a lot more investigation, questioning and for gaining many insights.
The stories in this 300 page compilation have been illustrated with the sometimes quirky, sometimes amusing but always insightful line drawings that have been the hallmark of the PA Update since the beginning. It also includes a series of analysis and perspective by individuals with well established expertise in their fields of work, all related to the wildlife and environmental issues of the region.
It’s been a hugely instructive experience putting it together and we are confident it will be the same for those who will venture out now to read it. 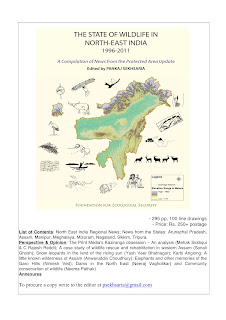 Posted by PANKAJ SEKHSARIA at 11:44 AM No comments: Links to this post

Just started a new facebook group for the andaman and nicobar islands http://www.facebook.com/groups/andamanicobar/
Posted by PANKAJ SEKHSARIA at 1:27 PM No comments: Links to this post