PROTECTED AREA UPDATE
News and Information from protected areas in India and South Asia
Vol. XVIII No. 1
February 2012 (No. 95)

TAMIL NADU
- Tiger population in Sathyamangalam WLS at least 25
- Over 10,000 kgs of sea cucumber seized in Gulf of Mannar Biosphere Reserve in year 2011

UTTARAKHAND
- Over 100 leopard deaths in Uttarakhand in 2011
- Twice rejected by FAC, hydro-project in buffer zone of Nanda Devi BR gets MoEF approval

FROM THE ARCHIVES: A Decade Ago
PERSPECTIVE
---
EDITORIAL
'Wildlife’s infrastructure nightmare'

More roads that penetrate deeper, railway lines that connect better and faster, dam projects for power and irrigation, coal mining for more electricity, high-tension power lines to evacuate that electricity…. This is one side of India’s infrastructure and constantly lauded growth story.
There is another side to that very story which reads something like the following: Roads that cut through rich forests, railways lines that regularly kill elephants, dam projects that drown pristine forests and wildlife habitats, coal mining that rips apart tiger corridors, high tension lines that kill elephants in Orissa and flamingoes in Gujarat…
From the Nallamalla forests of Andhra Pradesh to the valley of the Alaknanda in Uttarakhand; from the elephant forests of Orissa to the Great Rann of Kutch in Gujarat – the story is the same – what is unfolding is nothing short of a nightmare for India’s wildlife. The infrastructure for our automobiles, power and lifestyles is leaving nothing of the natural infrastructure that the wild denizens need. As we travel faster, longer, and deeper and as the GDP becomes the only mantra, the elephants, the tigers, the leopards and even the flamingoes are getting hemmed in more and more with every passing day.
The fate of the flamingoes in Gujarat highlights this starkly. Their only option on being disturbed at night by vehicular noise in the Great Rann was to fly into high-tension wires hanging above and get charred instantly. Between the vehicle and the wire, India’s beleaguered wildlife is getting sandwiched and slaughtered like never before.
One ‘eco’ – the economic is soaring as everything ecologic is being torn to shreds. The tragic irony is that the same system sells to us and to the world the prowling tiger, the gamboling elephant, the soaring birds and, yes, the dancing tribal as ‘Incredible India’. We at the PA Update are part of a small crowd that’s watching on with incredulity. And with despair.
----

Publication of the PA Update has been supported by

- Foundation for Ecological Security (FES)
http://fes.org.in/
- Duleep Matthai Nature Conservation Trust
C/o FES
- Donations from a number of individual supporters
---
Information has been sourced from different newspapers and
http://indiaenvironmentportal.org.in
Posted by PANKAJ SEKHSARIA at 11:06 AM No comments: Links to this post

'Because Andaman's forests are Jarawa infested …'

Infestation, in'fes•ta'tion n. the state of being invaded or overrun by pests or parasites. Do people inhabit the lands and forests that they have been living in for thousands of years or do they infest them? The answer to this no-brainer of a question might well lie at the root of the problem being faced by the Jarawas in the Andaman Islands today. The video showing the Jarawa women dancing on the Andaman Trunk Road, apparently for food, is just the latest manifestation of a malaise that is so deep that one might well argue that there is no hope for the Jarawa.

In 1965, the Ministry of Rehabilitation, Government of India, published an important document related to the Andaman & Nicobar Islands: ‘The Report by the Inter Departmental Team on Accelerated Development Programme for A&N Islands.' The contents of the report and their purpose were evident in the title itself — it laid out the roadmap for the development of these islands and set the stage for what was to happen over the decades that have followed.

This little known report of less than a 100 pages in size is remarkable for the insight it provides into the thinking and the mindset of the times. There is what one might call a shocker on every page of this document and here is a just a sampling:

Page 26: …The Jarawas have been uniformly hostile to all outsiders with the result that about half the Middle Andaman is treated as a Jarawa infested (emphasis added) area which is difficult for any outsider to venture… With the present road construction and the colonisation of the forest fringes, friction has become more frequent, and no month passes without a case of attack by the Jarawas.

Page 69: The completion of the Great Andaman Trunk Road would go a long way to help in the extraction of forest produces...

A nation that had just fought its way out of the ignominy of being a colony was well on the way to becoming a coloniser itself. And those that came in the way could only be pests or parasites infesting the forests that had valuable resources locked away from productive use.

It is also pertinent to note here that in 1957 itself, more than a 1000 sq. km of these “Jarawa infested” forests of South and Middle Andaman had already been declared protected as a Jarawa Tribal Reserve under the provisions of the Andaman and Nicobar Protection of Aboriginal Tribes Regulation (ANPATR) — 1956. The 1965 report was in complete violation, or was a result of complete ignorance of this legal protection to the Jarawa and the forests that they have inhabited for thousands of years.

The seeds that were sown then have bloomed into myriad noxious weeds today and if one knows this history, the latest video that has generated so much heat is not in the bit surprising. Much space in the media, both print and electronic, has been occupied in the last few days by a range of claims and counter claims — about the date of the video, about the police involvement in its making, the role of tour operators and about fixing blame and responsibility. A little known fact that lies at the root of the issue has been all but forgotten — the existence of the Andaman Trunk Road, where this infamous video was shot about three years ago. The Andaman Trunk Road that the 1965 report offered as a good way of extracting resources from the forests of the Jarawa had been ordered shut by a Supreme Court order of 2002.

It's been a decade now and in what can only be called audacious defiance, the administration of this little Union Territory has wilfully violated orders of the highest court of the land. A series of administrators have come and gone but contempt for the Supreme Court remains.

Whenever asked about the order, the administration has tried to hide behind technicalities of interpreting the court order and arguing that the court had never ordered the road shut in the first place. They forget that in March 2003, a few months after the SC orders had been passed, they had themselves filed an affidavit with a plea to “permit the use/movement through the Andaman Trunk Road.” If it was not ordered shut, why the plea to keep it open? A few months later, in July 2003, the Supreme Court appointed Central Empowered Committee reiterated explicitly that the court orders include those for the closure of the ATR in those parts where it runs through the forests of the Jarawa Tribal Reserve. The A&N administration has clearly violated the court's order both in letter and in spirit.

It is a spirit that was evocatively articulated by Dr. R.K. Bhattacharchaya, former Director of the Anthropological Survey of India, in a report he submitted to the Calcutta High Court in 2004. “The ATR”, he said, “is like a public thoroughfare through a private courtyard… In the whole of human history, we find that the dominant group for their own advantage has always won over the minorities, not always paying attention to the issue of ethics. Closure of the ATR would perhaps be the first gesture of goodwill on part of the dominant towards an acutely marginalized group almost on the verge of extinction”.

The video in all its perversity offers us another opportunity, when all others in the past have been brushed aside either due to ignorance, arrogance or then sheer apathy. It's still not too late to make that ‘gesture of goodwill' because otherwise there will be many more such videos down the years and much worse will follow. The lessons from history are very clear on this. And it will hardly be a consolation that a few people will be left saying we told you so.

(The writer is associated with Kalpavriksh, one of the three NGOs whose petition before the Supreme Court resulted in orders for the closure of the Andaman Trunk Road in 2002. He is also the author of Troubled Islands — Writings on the indigenous peoples and environment of the A&N Islands.) 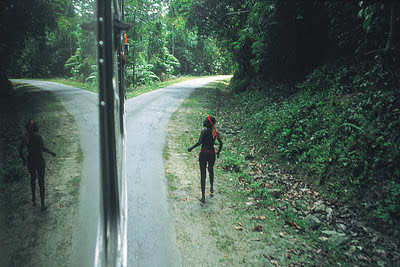 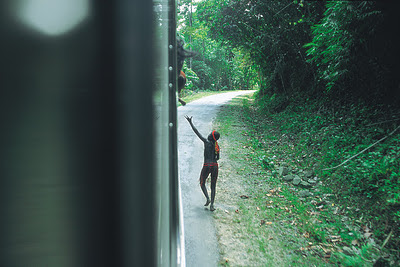 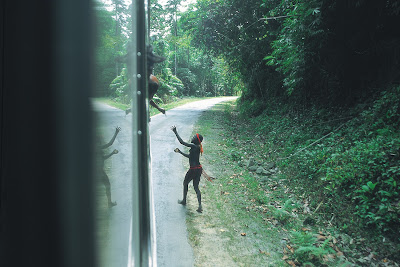 This is a three picture set that shows a Jarawa woman being given some eatables by the driver of a passenger bus on that section of the Andaman Trunk Road that has been ordered shut by the Supreme Court. The pictures were taken in February 2003, a few months after the SC orders of May 2002, and were also submitted to the Supreme Court-appointed Central Empowered Committee as evidence of continued and undesirable interaction taking place on the Andaman Trunk Road. I was sitting inside and at the back end of the bus when taking the pictures. Photo: Pankaj Sekhsaria
Posted by PANKAJ SEKHSARIA at 10:45 AM No comments: Links to this post