Islands in Flux - an excerpt in Caravan

An excerpt in Caravan...a story published first in Frontline in 1998
See: http://www.caravanmagazine.in/vantage/jarawa-excursions-an-excerpt-from-pankaj-sekhsarias-islands-in-flux
--
The books available now in stores, and via mark my book: Buy at http://bit.ly/2nOprZQ and on
A kindle version is also available now: https://tinyurl.com/mvc7aja

Jarawa Excursions: An Excerpt from Pankaj Sekhsaria’s “Islands in Flux”
Sekhsaria discusses an unusual occurrence: an excursion by members of the Jarawa community, seemingly to establish contact with the mainland.
caravanmagazine.in
Posted by PANKAJ SEKHSARIA at 7:12 PM No comments: Links to this post

Should the names of the A&N islands be changed

Should the name of A&N islands be changed? This is a question that keeps coming up again and again like a bad dream, as if there is nothing more important in or for the islands. (A BJP MP has just made a call for this: See: http://www.indiatimes.com/…/a-bjp-member-is-demanding-to-ch…) See the link below for a short article I did exactly a decade ago (in 2007) for the Times of India questioning the rationale? It appears again in the new collection of 'old' A&N writings 'Islands in flux - the Andaman story'.
https://www.academia.edu/31998259/Forgotten_Islands
Posted by PANKAJ SEKHSARIA at 8:17 PM No comments: Links to this post

A visit and an aftermath....In 'Islands in Flux'

A visit and an aftermath...
When the President of India visited the islands in December 2007!
Read the full account in 'Islands in Flux - the Andaman and Nicobar Story'
In stores now across the country and online on amazon: http://bit.ly/IslandsInFlux
#andaman #nicobar #islandsinflux #thelastwave
---
Write to thelastwave1@gmail.com for more details including for signed copies of 'The Last Wave' and 'Islands in Flux' 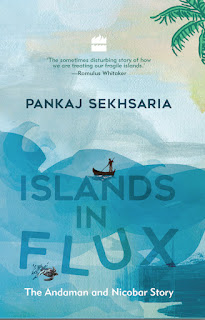 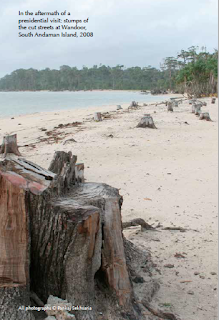 Posted by PANKAJ SEKHSARIA at 1:53 PM No comments: Links to this post

Islands in Flux - a launch in Auroville 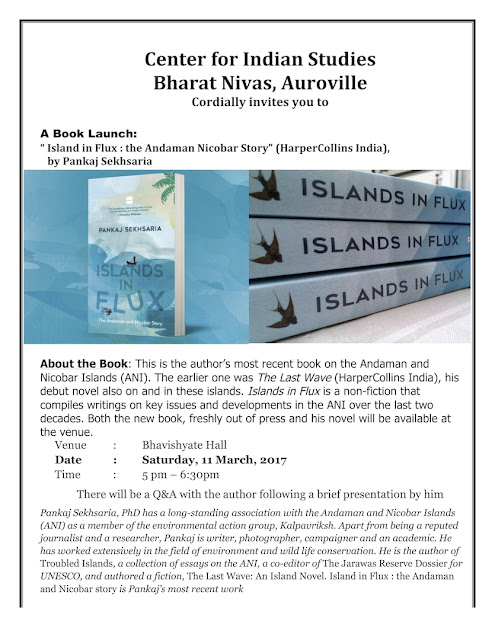 Posted by PANKAJ SEKHSARIA at 6:04 PM No comments: Links to this post

Islands in Flux - the Andaman and Nicobar Story

From inside 'Islands in Flux...'
A picture of the coral uplift seen off the west coast of Interview Island in the immediate aftermath of the earthquake of December 2004 - appears in the book as a special picture section
#andaman #nicobar #islandsinflux #thelastwave
Buy now: http://bit.ly/IslandsInFlux
---
Write to thelastwave1@gmail.com for more details including for signed copies of 'The Last Wave' and 'Islands in Flux'

Posted by PANKAJ SEKHSARIA at 12:41 PM No comments: Links to this post

Islands on the seam

Islands on the seam

Early last January , the Andaman & Nicobar Islands administration in Port Blair received a curious plan for the development of the islands via the office of the NITI Aayog. Titled ‘An Approach Paper on ‘Prospects of Island Development - Options for India’, it was intriguing at various levels.
First, it was drafted not by the regular agencies, but by the New Delhi based Integrated Headquarters of Ministry of Defence—(Navy). For a paper prepared by the defence establishment, the focus was surprisingly less on strategic and defence-related projects and more on economic activities such as rail construction, port and petrochemical complex development, special economic zones (SEZ) and the tourism industry. At another level, for a plan that articulates the need for economic, social, ecological and cultural sustainability in development strategy, it was strikingly ignorant of the historical, social, ecological and legal context of the unique island system.
Of particular relevance here is the Andaman and Nicobar Protection of Aboriginal Tribes Regulation (ANPATR) that was promulgated in 1956. Significant areas of the islands have been protected under this regulation for indigenous communities like the Jarawa and the Onge. The Approach Paper in its 40-odd pages does not have any mention of ANPATR even as it proposes a number of projects that will impinge directly on the lands and rights protected by the regulation.
50 years ago
As I read the plan, my mind went back to the late 1990s when I had just started to work on issues concerning the islands. I had then, quite accidentally, come across another proposal for the development of A&N. This was the ‘Report by the Inter-Departmental Team on Accelerated Development Programme for A&N Islands’, published in 1965 by the Ministry of Rehabilitation. It laid out a roadmap and set the stage for what was to happen over the decades that followed.
It was, in fact, a blueprint for the ‘colonisation’ of the islands, both in letter and spirit. Chapter 12 was even titled ‘Colonisation’, and it struck me hard to see a country that had been a colony till 1947 talking the language and the intent of the coloniser less than two decades later. The forests on the islands, inhabited by the Onge and the Jarawa, were referred to as ‘Jarawa infested’ and the forests had no value but for their timber.
Little Andaman Island, the roughly 730 square kilometres that is home to the indigenous Onge community has, interestingly, been a pivot in both plans even though they are separated by more than five decades. The 1965 plan suggested the clearance of 60,000 acres of forests, the settling in of 12,000 families from the mainland, and the establishment of an integrated industrial complex that would include timber and sugar industries.
The 2016 vision includes the island’s transformation into an integrated tourism complex through long-lease or a PPP model, development of an international airport, and the construction of a new harbour at Dugong Creek for inter-island connectivity. The clock, it seems, has not moved at all for planners and powers that be.
What is particularly striking about last year’s plan is its complete ignorance and lack of engagement with the tectonic changes that have taken place in the legal and policy framework of the country, quite apart from matters of geology and ecology. The premise is clearly what anthropologist Vishvajit Pandya described as ‘terra-nullius’—empty, unexplored, virgin territory that is waiting to be acted upon and operationalised. One needs only to scratch the surface to realise how deeply flawed and violative it is.
Unreal plans
One might argue that 1965 was a different era, but it’s difficult to understand how in 2016, the tribal regulation is not accounted for at all; the fact that 520 sq. km. of Little Andaman is protected as the Onge Tribal Reserve and that Dugong Creek, where the harbour is proposed, is located deep inside the Reserve and has the most important settlement of Onges.
The plan does not account for realities such as the fact that drinking water is a big challenge in many of the islands, that the islands are located in Seismic Zone V, part of the world’s most active seismic regions, that earthquakes are regular occurrences, that the 2004 tsunami was caused by an earthquake not far from the Nicobar Islands, and that tourism will be the first and the worst affected in case of calamities like earthquakes, tsunamis and cyclones, which occur here regularly.
At a meeting of the NITI Aayog held in September last year, the plan for the promotion of high-end tourism in four islands—Smith, Ross, Avis and Long—was approved. Little Andaman too came up for detailed discussion, though a decision was thankfully deferred on account of concerns raised in various quarters, including the A&N administration. But a follow-up call for proposals issued in November 2016 by NITI Aayog does include Little Andaman.
With a former minister in the BJP-ruled Delhi government, Jagdish Mukhi, now the Lieutenant Governor of the islands, it is likely there will be a greater thrust on development plans, with tourism being given top priority. The impact this will have on forests, biodiversity and on the Onge community can only be imagined.
When the government team went to Little Andaman in 1964-65, the entire island was a tribal reserve, the forests unexploited, and the Onge the sole residents on the island they have inhabited for thousands of years. Half a century of ‘development’ later, the Onge Reserve is roughly 30% smaller (more than 200 sq. km of forest has been handed over for settlements, plantations, agriculture), the remaining forests are under increasing pressure, and for every Onge on Little Andaman there are now about 200 individuals from outside. The land of the Onge is not the land of the Onge any more. What more needs to be said?

The writer researches issues at the intersection of environment, science, society and technology.
Posted by PANKAJ SEKHSARIA at 7:45 AM No comments: Links to this post