Innocent victim : A Hawksbill Turtle entangled in a plastic net.

Here are some unbelievable facts of what garbage, mainly plastic waste, is doing to our oceans and the birds and animals that live in them.

According to the United Nations Environment Programme at least one million sea birds and about 100,000 marine mammals such as dolphins, whales and seals are killed by plastic every year.

A study conducted in the Netherlands found that 95 per cent of sea birds in the North Sea had plastic inside their stomachs; one bird in Belgium had 1600 pieces of plastic in its stomach. Nearly 600,000 tons of discarded plastic is believed to have settled at the bottom of the North sea.

There is so much plastic waste that is floating on our seas that researchers, scientists and regular ocean travellers refer to these as continents of plastic; a single plastic continent could weigh over three million tons.

One only needs to do a simple ‘garbage in oceans’ search on the Internet to actually find out the scale of the problem that we have created. Tens of thousands of pages of shocking information and pictures about the state of the oceans that cover 70 per cent of this planet. It is important also to bear in mind that this is a problem that is essentially created by humans. Over 80 per cent of the plastic that is found in the seas has been washed out from land – from our landfills, from our garbage cans – the plastic that we use and carelessly throw away day after day.

All of us may not have the opportunity to see what is happening in the far away oceans, a visit to any of our coast lines that is piled up with waste of all kinds gives us a good idea of the scale of this crisis.

Coastal Clean up day was on September 20, and was one effort at dealing with the problem when a large number of organisations and volunteers all over the world came together to clean up the coasts. The magnitude is such, that efforts like this can only make a small dent. A much better and long term solution, experts point out, is to adopt the 3R principle – Reduce, Reuse, Recycle. That might be the only way out, because how much ever we clean up, the waste is not going away if we continue to generate it at the pace and quantities that we are presently doing. 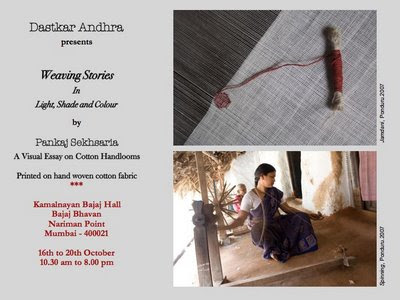 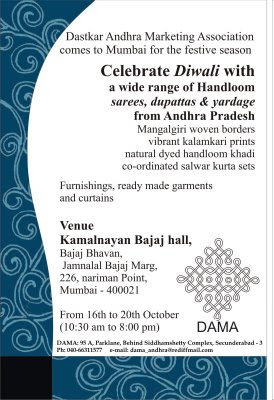 Posted by PANKAJ SEKHSARIA at 1:12 PM No comments: Links to this post

The plight of India's 'unskilled' weavers

The plight of India's 'unskilled' weavers

V enkataswamy U/s – a small sign in grey painted besides the door of a locked house in the new weavers colony of Chinnur in the Adilabad district of Andhra Pradesh. It is a simple photograph I took a decade ago when I first started photographing cotton handlooms, but it remains starkly and vividly etched in my memory and so does the story.

U/s stood for 'unskilled' and this is what Venkataswamy had painted about himself outside the door of his own house. I never met Venkataswamy, but was told that he was employed as a chowkidar in the Mineral Exploration Corporation Limited (MECL) and it was in the identity card issued by his employers that he had been identified as V Venkataswami U/s. A little later, he gave up the chowkidar's job, moved to Bhilai to work as a domestic help for a while and then came back to Chinnur to make a living as an autorickshaw driver. This is the kind of story that is common across the Indian landscape, but like many, what is evident on the surface, is not the entire truth.

The 'unskilled' Venkataswamy was till a few years earlier acknowledged as one of the finest cotton handloom weavers in the region. He was an integral part of one of the finest and richest traditions that India has been historically known for — a tradition that was and is livelihood, craft, skill all put together in one of the most efficient, environment-friendly and decentralised industrial enterprises.

In its own way, this story is not uncommon and also raises many questions. Why did Venkataswamy give up weaving? Why did he get the U/s label? Why did he accept it? Did he not believe that weaving needed skill? What does this also indicate of the attitude and perceptions of others? What does it say of the society and nation that we live in and of policy planners and policy that will not allow a weaver to continue making a decent livelihood in what he knows best? What kind of systems do we have that first turn a weaver to a daily wage earner and then brand him U/s?

Certain basic facts might help here to explain the continued and vital relevance of this industry in the country today and place the 'unskilled' story into context. Andhra Pradesh is a good case in point. Not only is the state famous for some of the most famous handloom traditions like the khadi of Ponduru, the silks of Pochampalli and the sarees of Mangalgiri & Gadwal, it also provides direct employment to nearly 200,000 families across the state and generates an annual output of more than Rs1,000 crore. A very large number of additional families are also involved in activities that are considered ancilliary, but are critical to the handloom production cycle.
The national context is not very different — an estimated 120 lakh families are employed in the handloom sector that produces nearly 13% of the nation's textile output. It is a livelihood that is rooted in the local context of the weaver, is completely in control of the weaving family, involves high skill and precision and is one of the most environment-friendly; an important and viable economic activity whose carbon emission, for instance, is virtually nil. If there is a win-win scenario anywhere, this has to be it.

That the handloom industry has not got the kind of understanding and support it deserves from the state, from society as a whole as also from the consumer is well known. What is perhaps lesser known is the fact that the last few years have also seen the setting up of a number of interesting and promising initiatives aimed at revitalising and re-energising the handloom industry, particularly connecting the weaver with the rapidly changing realities of urban markets and design sensibilities that are constantly evolving.

There is a whole basket of such new attempts. Larger ones like the entrepreneurship based business models of Fabindia and Anokhi; non-governmental organisation initiatives like those of Urmul in Rajasthan and Dastkar Andhra in Andhra Pradesh and smaller, extremely localised ventures like the Charakha Weavers Co-operative run by Dalit women in the Shimoga district of Karnataka. Hundreds of other weavers' co-operatives continue to work well across the country and there is also a growing interest and acknowledgement in the international market.
Concern about the viability of handlooms is a misplaced one — that doubt needs to be quickly laid to rest for the precise reason that the handloom industry is one of the most viable and most sustainable. It is the neglect and destruction of this industry that will create more Venkataswamys and that is something we certainly don't want.

—Pankaj Sekhsaria
(The writer is a wildlife photographer, journalist and an environmental researcher)
Posted by PANKAJ SEKHSARIA at 10:27 AM No comments: Links to this post