The leopards of Akole - 4

To understand the serious incidents in Junnar involving big cats attacking humans, we need to go back to 2003. It was the time when the human-leopard conflict had peaked.

Leopards were being captured in cages in an effort to deal with the problem. Trapping leopards has, for long, been the main response to deal with a conflict situation. It is also one way of showing that action is indeed being taken. This becomes particularly relevant when there are human attacks and demand from the public, the politicians and the media to do something mounts. It happened in Junnar and continues to happen in a number of other places too.
The recent case of shooting down the wrong tiger in Tadoba Tiger Reserve is a classic case of wrong decisions being taken under intense media glare and political pressure.
As far as Junnar is concerned, a team of researchers that included Vidya Athreya and Pune-based veterinarian Anirudh Belsare had started working on getting a scientific understanding of the cause of the increased conflict.
A part of their effort was to mark and electronically tag these problem animals. This was done by inserting a small rice grain sized chip at the point where the animals' tails are attached to the body. The chips are uniquely numbered and can be read like a barcode is in the supermarket. Since captured leopards at that point were being released into other areas with potentially thick forests, it was hoped that the tagging exercise would help in tracking them once they were set free. 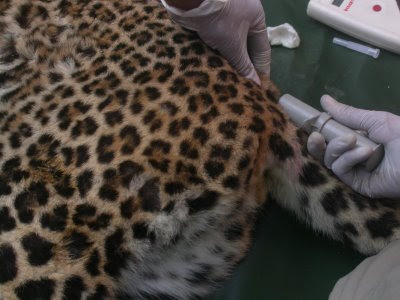 The microchip being inserted into the body of a tranquilised leopard (Pic: Vidya Athreya) 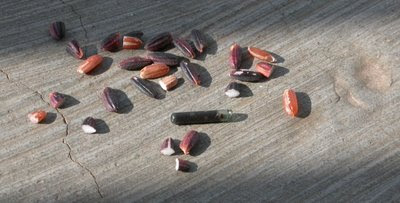 A microchip amidst grains of rice gives an idea of its size (Pic: Vidya Athreya)
A number of these tagged leopards were moved 400 km to the Yawal wildlife sanctuary in Jalgaon district like they were to other parts of the state. They were subsequently released into these forests.
Yawal's forests have always had leopards but there were never any reports of attacks on humans. There was surprise and huge fear then, when villages in and around the forests, experienced a sudden and vicious spate of leopard attacks towards the end of 2003. 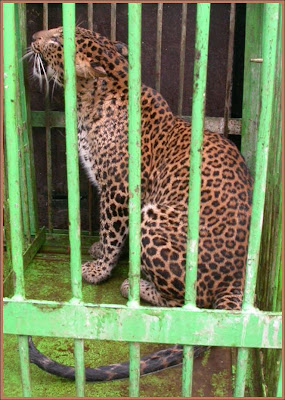 The female leopard that was caught in Yaval (Pic: Vidya Athreya) 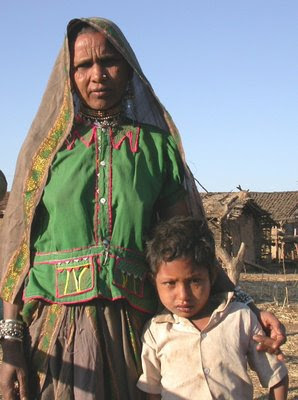 A girl that was attacked by a leopard in Yaval (Pic: Vidya Athreya)

The two-month period stretching from October 31 to December 24 saw six attacks in a region that had absolutely no such history. The attacks stopped only when trap cages were put in place and two leopards were caught. What was striking about both these leopards, one male, the other female, was that these were Junnar leopards that had been released here just a few weeks ago. The chips inserted before their release had confirmed this fact. Movement of captured leopards from the area of conflict had in fact helped move the conflict to the new areas and significantly, to where it had never existed. This was not an isolated case. 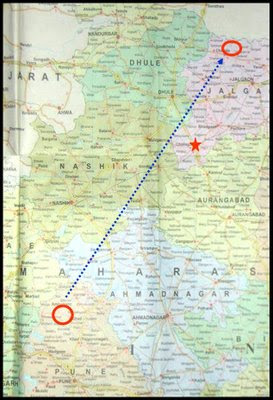 Junnar and Yaval. The star shows the point about 70 kms from Yaval towards Junnar where the released leopard was recaptured (Pic: Vidya Athreya)
It was becoming increasingly clear that the huge problem of human-leopard conflict that seemed to be spreading all over was essentially, a human created one. Athreya wrote almost immediately to the chief wildlife warden of the state that they were now certain that nearly all the cases of conflict and attack on humans that had occurred across the state from 2001 to 2004 were indeed due to the translocation that had preceded them.
Translocation which was being considered a simple answer and in use all over India, in fact, lay at the very root of the problem it sought to solve. It is only with the benefit of hindsight, we can now say we should have been more careful. Hopefully, the lessons have been learnt and the same mistakes will not be made again. There certainly are other contributory factors, some known and others that have still to be uncovered, but one key causative factor has certainly been understood. The earlier work that led to critical understanding of the problem in Junnar is an excellent example of that, as is the present effort at understanding the leopards of Akole and its behaviour.
We might not know all the causes that could push the Akole situation in a Junnar- like direction; but we can now say with confidence that we know of at least a critical few. The least we should ensure is that we don't repeat the mistakes of the past.

In a recent response to an application filed under the Right to Information Act (RTI), the Maharashtra Forest Department (FD) admitted that the wrong tiger was killed as a man-eater in the Tadoba forests in 2007.
The FD reply stated that it had acted in haste under political pressure and points to letters it received from local politicians who had threatened to agitate and even kill the man-eater themselves.
Villagers had complained in October 2007 that a tigress was killing people and cattle in and around the Tadoba-Andhari Tiger Reserve. The FD began a hunt in November but failed to capture the animal. Local politicians then turned up the heat. During a subsequent operation, the officials sighted a tiger eating its kill. The team fired 39 bullets, of which 12 had hit the mark.


Box 2
Conflict moved
A small boy was attacked in the Radhanagari WLS in Kolhapur district in February 2004 by a leopard. The leopard suffered a serious injury (broken skull) when it was assaulted by the father in defense of his child. The animal was trapped by the Forest Department and was identified by its chip as the female that had been captured in Narayangaon (Pune District) in March 2003 and released in the Radhanagari forests a year later in February 2004. The attack had occurred a day after she had been released and less than 5 km from her release site.
Similarly another individual that was caught in Sangamner and inserted with a chip was released in Mumbai’s Sanjay Gandhi National Park only to be recaptured in a Thane marriage hall a few weeks later.

Box 3
Animals Return
It is now well known that large carnivores like bears, leopards and tigers have a very strong homing tendency and they instinctively try to return to the area that they had been moved from. There are instances of the cougars, a leopard sized wild cat found on the American continent, having traveled over 400 kms back to their site of capture to resume livestock depredation. Closer home, a ‘problem leopard’ caught 120 km away and released inside the Nagarhole National Park in Karnataka in 1990 had immediately moved out of the park. Another ‘problem leopard’ captured in Gujarat and translocated 30 kms away was fitted with a radio collar. It was found to immediately return to its earlier territory and resume livestock depredation. Even the Yawal leopard had moved nearly 90 kms in the direction of Junnar from the site of her release in side the Yawal Wildlife Sanctuary before she was captured the second time
----

1) Man-Animal Row: Study holds vital clues
2) Akole's leopards have hardly jumped humans
3) How did the leopards get to Akole?
4) Conflict in Junnar is due to relocation
5) Understanding Akole's unusual phenomenon

Posted by PANKAJ SEKHSARIA at 5:17 PM