THE "Incredible India" campaign to promote tourism in India urges people to experience the emerald islands of Andaman and Nicobar. The campaign became aggressive after the tsunami of December 26, 2004 caused severe damage to people, places and aqua marine life around the 572 islands that form Andaman and Nicobar. The government handed out attractive packages and discounts to visit the islands. The results were for everyone to see -- the tourism figures that had declined post-tsunami recovered within a year.
While the picture postcard images of the virgin beaches are true, the increasing numbers of visitors to the islands are posing several challenges to the fragile ecology of the cluster.
.......
On December 26, 2004, the tidal wave that swept over the islands, left after killing over 1,000 people, leaving over 3,000 missing and putting the damages at over Rs1,000 crore. A constant and huge flow of funds, relief operations, reconstruction and redevelopment followed. The tsunami had hit when the tourism season was at its peak causing the numbers to drop.

Since tourism is recognized as one of the main occupations along with coconut cultivation, the government undertook special efforts to restore the falling figures in 2005. In 1980, less than 10,000 tourists visited the islands but by 2004, the number had crossed 100,000. In 2005, the number dipped to 50,000 but it is estimated that the following year, over 1,30,000 travellers visited the islands.

According to the tourism policy and vision statement of the administration, there are plans to increase access to the islands that are not open yet but have potential. But even with the existing facilities, the islands are facing a crisis. In November 2006, even before the peak season had set in, the lack of adequate accommodation meant that tourists had to be accommodated in temples and airport premises. Many new resorts and hotels are being constructed to accommodate the rising figures.

Syed Liyakhat from Equitable Tourism, an NGO based in Bangalore, cautions about the pressure on the islands, "If the population of the islands is put at 3,56,265 according to 2001 census or even just over 4,00,000, then the tourists comprise of more than 25 per cent. One has to see if the place is equipped to handle this kind of pressure."

Zubair Ahmed, who runs the weekly *Light of Andamans*, says, "It is important that any tourism activity helps the local economy but that is not the case here. There are talks about opening up of islands. Tourism activity will be closer to the sea and on the beach. This may result in flouting of rules."

After tsunami, stricter Coastal Regulation Zone (CRZ) rules were brought to make the structures safe and avoid any risk of damages due to unusual sea activity. No construction activity is permitted within 200 meters of the coastline. Even fishing communities that lived within this distances are being relocated. However, with upcoming beach resorts, these rules may be relaxed.

Samir Acharya, who runs Society for Andaman and Nicobar Ecology (SANE), says, "To cater to the large number of tourist arrivals, there is a mushrooming growth of accommodation and such accommodations are coming up without proper planning and frequently in violation of the law of the land. In Havelock Island, in most popular tourist destination outside Port Blair, 90 per cent of all tourist facilities stand in violation of CRZ."

A study done by Equitable Tourism in 2002 states, "The tourism vision, if not anything else, is only rhetoric on sustainable ecotourism with little substance to back it up. On the contrary, the vision seeks to relax CRZ and other environmental guidelines for projects on the coast and obtain clearances for tourism projects on forest lands."

The other concern expressed by environmentalists is of the high volume of low-budget tourists that arrive having availed of the Leave Travel Concession (LTC) given by government and public sector companies. LTC tourists are proving to be burden on the islands, as they do not contribute to the local economy. To promote tourism, the government subsidises travel by air as well as by ship. The expenditure borne by the administration and not the tourists is not helping the economy, say locals. More than 90 per cent of tourists are domestic tourists and of the foreign tourists, most of them are backpackers.

Samir Acharya disapproves of the tourists who visit. "Most of the tourists are LTC tourists who come here solely for the privilege of flying and not for the destination. Among the foreign tourist arrivals, a great majority are backpackers and a dollar-a-day tourists. Their main contribution is to enjoy the subsidies and privileges given to the Islanders at Indian taxpayers cost. For example a ship passage by bunk class from Chennai or Kolkata to Port Blair costs only Rs. 1,500 after allowing a Rs. 6,000 subsidy," he says.

With rich but delicate and fragile aqua culture, the islands need ecologically conscious tourists, who are sensitised about the environmental challenges. There have been several incidents where corals have been broken or damaged intentionally or unintentionally by tourists who go for diving and other aqua sports. Resorts like the Jungle Resort by the Barefoot Group,
encourages low volume high-end tourists where the facilities provided are expensive but keep environmental concerns in mind.

Tourist activity also results in over-consumption of available resources like water and electricity. The local population bears the brunt to provide for the extra. Pankaj Sekhsaria of Kalpavriksh says, "The A&N administration needs to extremely careful with the way they are promoting tourism in the islands. We have seen in the last few months that fresh water is a serious constraint, particularly in parts of Port Blair and it seems evident that the administration has not considered matters such as this and the limited infrastructure in the islands to cater to this kind of tourist rush."

All the 38 inhabited islands depend mostly on rainwater. Despite getting good rains during the monsoons, by April the islands face severe water shortage. Moreover, the tsunami wave, which swept over the few fresh water springs, has perhaps caused permanent damage to those springs, thus making most inhabitants dependent on the administration supply.

Acharya provides details of water rationing, "The shortage of water in Andamans is a matter of record. Post tsunami it is increasingly worsening. Water rationing is an annual feature here starting usually from February and continuing till the onset of the monsoons. This year, the authorities were forced to resort to rationing a full month in advance in January itself. During water rationing, the average Port Blair family gets water only for half an hour every alternate day. At present we are getting water half an hour a day in three days. Many rural areas and the poorer folk in town are worse off. Since tourists are also human beings, obviously, they consume quite a bit of water. In fact even in middle class hotels and resorts an average tourist consumes two to three times the quantity that an average Port Blairian gets."

Another problem is waste management. There is no dedicated waste management plan to deal with increasing number of tourists and the commensurate increase in disposables like bottled water. As of now large amounts of garbage and sewage finds their way into the sea. As Sekhsaria points out, "There needs to be an assessment of volume of tourists that the islands can presently handle, of what resources will be needed and what is available. It is asking for trouble otherwise. We also have no idea whether the administration has waste management and disposal systems in place to deal with the huge tourist rush."

Of the total area, nearly 86 per cent is forest cover and with the stricter CRZ rules, the land available for development is less than eight per cent of the total land. Though this seems like sufficient forest cover, cutting down of trees will result in several rare species of flora and fauna going extinct. The islands also are home to 22 per cent mangroves cover of India and the recent tsunami has caused permanent damage to large areas of cultivation as well as mangroves. Despite the damage caused by tsunami to the coral reefs and marine life, the archipelago is still home to several rare species. However, if the forests and sanctuaries are denotified and are made open to public, there is a risk to some of the near-extinct and rare species.

If the settlers are this apprehensive about unplanned tourism, one can only imagine its impact on the tribal population. The islands have some of the oldest aboriginal tribes in the world with whom "friendly contact" has yet to be established. Anthropologists and environmental groups have time and again criticised the ATR (Andaman Trunk Road), which cuts through the Jarawa reserve. Not only is maintaining this road an expensive affair, it has also exposed the Jarawa community to the passing traffic resulting in exploitation of Jarawas for exchange of tobacco and money. There is a possibility of opening up of 15 islands and more access to reserved sanctuaries as a part of promotion of tourism industry. This will result in reducing the natural habitat for these tribes and they will be forced to assimilate with the passing tourist traffic and local population.

Apart from the direct impact of unchecked tourism, another form of pressure is from the migratory population. Mohammad Jadwet, President of Andaman Chamber of Commerce, says lack of skilled labour is an obstacle for tourism activity. "There is lack of skilled labour and for everything one has to bring people from the mainland. Be it hospitality industry in terms of cooks or management or be it construction. Even labour is brought from mainland." This may result in several hundred people resettling on the islands, which has already crossed the maximum brim 400,000 mark. The Andamans and Nicobar islands leave tourists breathless with excitement. Yet it is these very visitors that could, in the long run, lead to the destruction of what makes these islands unique. 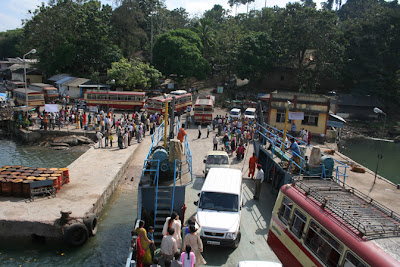 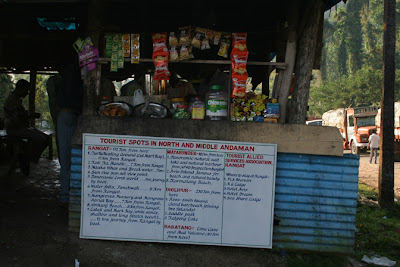 Tourist spots in North and Middle Andaman - A tea shop at Jirkatang, where the Andaman Trunk Road enters the Jarawa Tribal Reserve (December 2006) 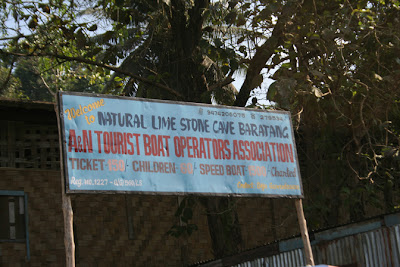 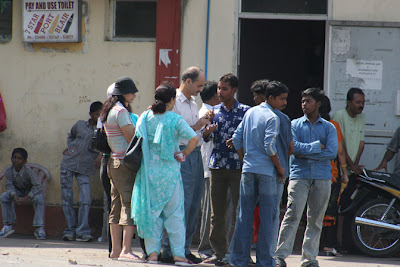 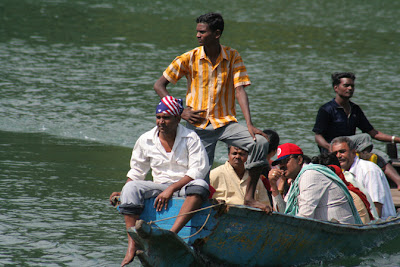 Returning from a trip to the limestone caves, Baratang (December 2006)
Posted by PANKAJ SEKHSARIA at 10:23 AM

Great to see you blog... yeah it's true.. its really difficult to see how we can manage the tourists... the major problem we are facing is drinking water... we get 20 liters of water per head once in 4 days.. that too in ration card... tourists are always welcome but managing them is difficult... thanks for your write up...

I was all set to plan my honeymoon here...but now in double mind!

But, sicne, I am too actively involved in tourism development, i feel it is like an chicken and egg theory!....more tourist, more prosperity....but more problem as well...in term of infrastructure, logistics, pollution etc....

What we need it responsible, ecological tourism!