While millions in India, Nepal and Bangladesh are badly affected by probably one of the worst floods in decades as described and local rumours of a Chudel !! haunting people catches their fancy and fodder for general talk and gossip in Sikkim, the indefinite hunger strike by Satyagrahis and members of ACT has reached its 47th Day today. This is the longest hunger strike in the history of Sikkim ever.

There is still no confirmation from press releases as reported in the daily papers or other sources about the two sides heading to the negotiating table.

Meanwhile the main opposition party, Congress, burned an effigy of Governor V Rama Rao on Saturday in front of Congress Bhawan for his alleged lack of attention towards the hunger strike of ACT. The incident triggered following a recent meeting of the Joint Action Committee with the Governor on July 25, wherein a memorandum was submitted to him to intervene and exercise his powers provided specially under Article 371F(g) of the Indian Constitution. 3 people have been arrested following this incident so far.

Mr Ashok Bhattacharya, Urban Development Minister of West Bengal and speaking on behalf the Communist Party of India (CPI (m)) also extended support to ACT at a function here in Sikkim to mark the 30 year old rule by the left front in West Bengal. Ironically, the Teesta Lower Dams fall in his area of influence!!

Besides, another opposition party in the State, has asked the Government for a white paper on the proposed hydel projects seeking to get a better and more comprehensive understanding of hydel projects. Pointing out that more than 75% of the total hydro electric power projects in Sikkim were non-fuctional(from a BJP assessment made in May 2006), many of the new projects coming up may meet the same fate! 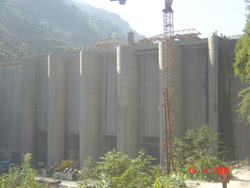 NDTV is presently giving coverage to the indefinite hunger strike by ACT and issues associated with it throughout the day in its hourly news updates. Banu Haralu, one of North Eastern India's senior journalist is covering it on behalf of NDTV.

Posted by PANKAJ SEKHSARIA at 2:53 PM

I believe that beyond the environmental aspect of the protests, there are also constitutional guarantees for the lepcha people, and indeed, also for the Sikkimese people under artcle 371f of the constitution.
For example, as per the constitution, old laws of Sikkim shall carry on being in force. One such old law prohibits any other sikkimese, or outsider from anywhere, from buying land in the Dzongu reserved area, they were infact even restricted from moving within the territory of Dzongu without valid permits.
If the laws are so stringent, how come private companies are romping all over the place buying land? Dont these laws apply to them? To delve into the constitutional justifications and guarantees accorded to the Sikkimese people during merger, we have formed a group to enquire into stuff like this so visit us at http://www.emeraldnova.com/cc371/ for more.

I am writing to inform you of a radical decision taken by Dr G.D. Agrawal, India's pre-eminent environmental quality scientist and a legendary Professor (and HoD) of Civil & Environmental Engineering at IIT-Kanpur (See attached biosketch).

Pained by the unrelenting destruction of the Ganga river, especially by a series of dams in its upper reaches, Dr Agrawal has decided to go on a fast-unto-death to oppose its continuing desecration. His conviction that we are staring at an unprecedented ecological and cultural catastrophe comes from his powerfully logical mind. (See also his critique of the proposed dams on the Bhagirathi river)

In a letter written to a few people close to him, Dr Agrawal explained his decision saying, "As you are aware, R. Bhagirathi Ganga has a very special place in Indian culture, thought and tradition. In the past few years, however, the continuity, quantity, quality and regime of flows are being disrupted for generation of hydro-electricity like all other rivers. Already in the reach downstream of Maneri, long stretches of Bhagirathi remain waterless for long periods. In the near future this may become the state of the entire river. As a serious student of environment sciences and as a faithful Hindu, this is hard for me to swallow. I strongly believe that at least Bhagirathi upstream of Uttarkashi should be spared of any works that disturb its natural flow-regime, ecology, purity or piety and, after brooding over it for several months, I have decided to oppose such works with all the might I have……. So after deep deliberation I have decided to "fast-unto-death" to oppose the destruction of this ecological marvel and the epitome of Hindu cultural faith."

Several scientists and activists whom he has mentored over the years have come together (See attached list) to try and mobilize public opinion to pressurize the governments of India and Uttarakhand to abandon the construction of all dams on the Bhagirathi river, upstream of Uttarkashi. We seek your support in this endeavour. Some ways in which you can do this are listed below:

(1) Help disseminate news of GD's fast and the underlying issues, as widely as possible. (I will be grateful if you can copy the mailing list to us.)
(2) Write articles for newspapers, including your local and vernacular media. (Please send us copies of the published material.)
(3) Write letters to the Prime Minister, Dr Manmohan Singh, Mrs Sonia Gandhi, Chairperson UPA, the Union Ministers for Water Resources (Prof. Saifuddin Soz) and Power (Shri Sushil Kumar Shinde) and the Chief Minister of Uttarakhand urging then to abandon the construction of all the new dams on the Bhagirathi upstream of Uttarkashi. Please release the letters to the media and send us copies.
(4) Mobilize local support groups – common people, women, students, scientists and other professionals, Ganga devotees, nature clubs, etc. Please let us know if you are interested in being part of a coordination group in your state.
(5) Mobilize political support for the demand raised by Dr Agrawal.
(6) Organize signature campaigns/online petitions.
(7) Demonstrate your support for the issues that Dr Agrawal is raising. Mobilize groups of people to sit on one-day fasts and ensure that the media covers them. (Please send us news reports.)
(8) Take delegations to meet high officials and decision-makers to lobby for the issues raised by Dr Agrawal and his basic demand.

These are just some initial ideas that have come to our minds. Please let us know what else needs to be done and can be done. We welcome your ideas. Also keep us informed of what all you are doing. If you need more information from us, please do not hesitate to contact us. I am attaching embedded Hindi fonts with this mail, as one of attachments is in Hindi. We may be able to provide you photographs of G.D. Agrawal and the dry stretches of the Ganga, sample leaflets/letters/petitions/posters in Hindi and English in a week or ten days.

Personally, I think that we have an uphill task before us, given the prevailing apathy and the obdurate governments at the centre and the state. I personally feel that to mark your active support to the cause, you should immediately sign on the petition on line at http://tapasya-bhagirathi.blogspot.com/ Hence your active support is essential. I look forward to a positive and quick response from you.
Sincerely
DEBASHISH SEN