Wildlife is on the brink...

Wildlife is on the brink…

Most that share landscapes with wildlife, for instance, live extremely low impact lives yet they pay the biggest cost for conservation.

If there is one dominating sense about the fate of wildlife in this country, it is that of ‘the end’. The wiping out of the tiger from the Sariska and Panna Tiger Reserves has been headline news; poaching and trading in wildlife parts con tinues unabated; human wildlife conflict — be it with carnivores like leopards or tigers, large mammals like elephants or smaller animals like wild boar, deer or monkeys — is seriously on the rise; lakes, rivers and other wetlands are either being dammed, poisoned or encroached upon; climate change threatens to change the world in an unprecedented manner and as a combined consequence wildlife numbers are dwindling precariously and many species of birds, animals and plants stand dangerously close to the precipice of extinction.

An important new twist was added to wildlife conservation debates a couple of years ago with the enactment of the Scheduled Tribes and Other Traditional Forest Dwellers (Recognition of Forest Rights) Act, popularly known as the Forest Rights Act (FRA). The debate over this act has been volatile and the opposition, particularly from a section of wildlife conservationists and former forest officers, has been and continues to be strong. A lot has been written about these concerns and strong affirmation came from a rather unlikely source around a year ago. A report in Newsweek (“India’s missing tigers”, May 5, 2008) took the argument to an unexpected extreme when it argued that ‘democracy and economic development’ were driving the tiger to extinction in India.

Many might actually agree with this articulation, but even a cursory analysis will reveal that the conclusions are as ill-informed as they are short sighted. An entire argument cannot be built on the analysis of and comment on just one piece of recent legislation in the country: the FRA. The law is a recent one and its implementation, if it is happening at all, has just about begun. While fears about forest and wildlife loss may indeed be justified, selectively wiping away history and placing the responsibility for the tiger’s demise at the door of this one legislation and one set of people is not only irresponsible but also can be counter-productive.

Particularly so since because one aspect of India’s conservation history — the role of former Prime Minister Indira Gandhi — continues to be repeatedly invoked, like in the Newsweek piece. A whole generation of wildlife enthusiasts and conservationists believe, and with good reason, that Indira Gandhi ensured that Indian wildlife still has some hope. She was the architect of critical legislations and frameworks that certainly helped protect wildlife and her personal interest and intervention like in the case of Silent Valley in Kerala ensured that many critical habitats were saved.

It is a legacy we cannot deny or wish away, but we also need to ask whether we can keep hanging on to the past? Our socio-political-economic-cultural realities have changed drastically since her time. It is the same nation and yet it is different . Wildlife conservation today, like anything else, has to be placed within this rapidly changing context. It is crucial to recognise that the same wildlife conservation policies will not succeed today just because they did in a different era. If she were alive today, Mrs. Gandhi would perhaps have agreed.

There is also a whole new ‘post-Indira Gandhi’ generation of wildlife biologists involved in cutting edge research across wild India. Many of their formulations of problems and solutions are extremely nuanced and far more representative of realities on the ground. They need to be asked and they need to be listened to.

Condemning the most vulnerable

It is no one’s case that wildlife conservation is easy. The challenges are immense and no one but the most optimistic will argue that the future for our wildlife is bright and hopeful. However, blaming the poor and the tribal; demanding their displacement to protect wildlife; seeking stricter and military-like protection is the wrong place to start. By doing this we are also ignoring many other realities. Most of the communities that share landscapes with wildlife, for instance, live extremely low impact lives and yet they are made to pay the biggest cost for conservation.

It is also not a coincidence that innumerable people’s agitations across the country today are fighting policies and projects (big dams, large scale mining, increased industrialisation) that predate on the basic survival of forest and land dependant communities. Neither is it a coincidence that many of these are important habitats that support a great diversity of threatened flora and fauna. It is as important that we recognise this overlap as it is for us to recognise that both communities and wildlife are, together, losing this battle. Nothing — be it the laws and the courts, the politicians and the bureaucrats or the media and the wildlife conservationists — are able to help them.

Hope and the FRA

Increased mining across the country, for instance, has been one of the most significant sources of concern for its impact on forests, tribal communities and important wildlife populations. In an ironic twist now, it is being suggested that the FRA might actually be the only hope for preventing mining in forest and wildlife rich areas. Efforts towards this end are already being made in states like Orissa and in particular in the Niyamgiri hills where the Dongaria Kondh Tribal community itself is fighting to save the forests. Additional hope has been kindled following the July 30, 2009 notification of the MoEF stating the forest land diversion for non-forest purposes should ensure compliance with the provisions of the FRA.

In this larger context then, it comes across as completely unfair to argue that rights for the poor, the marginalised and the historically dis-privileged necessarily means the demise of our wildlife? Can we turn the question and wonder if, in fact, “it is not too much democracy but too little of it that lies at the root our wildlife crisis?” That a more empowered people might actually fight better and more successfully? We don’t have the answers today; what we do have is the choice of which question we will ask. 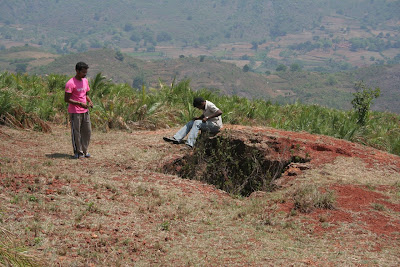 Bauxite prospecting pits on the Galikonda plateau in the Ananthgiri Hills of Andhra Pradesh. Mining is one of the biggest threats to tribal communities, forests and wildlife across large parts of the country (Photo: Pankaj Sekhsaria)

Posted by PANKAJ SEKHSARIA at 7:20 PM