Pankaj Sekhsaria
There is a new hierarchy that has slowly but surely entrenched itself in India’s urban reality. It is not really articulated in that light, but it is an experience that any resident of our cities could not have missed. Get on to the roads of your city as a pedestrian or a cyclist and you know instantly that you are a second class citizen. Zooming cars and two-wheelers, blaring horns, billowing smoke, narrower footpaths, fewer trees – it is increasingly a punishment to get out on to the city roads if you don’t have a personalised mode of motor transport.

More vehicles on our roads
Vehicles are being added to city roads like there is no tomorrow and the introduction of newer and cheaper cars like TATA’s Nano is only going to add to the unyielding rush. While the average human population in six of our biggest metros increased by a factor 1.8 between 1981 and 2001, vehicle numbers increased by over six times. Last year, Bangalore recorded the highest vehicle growth rate in the country with 14 per cent against a national average of 10, and 1000 cars are being added to the roads of New Delhi every day. A crisis awaits us around the corner, if it is not upon us already.

Unfortunately, all solutions suggested to deal with the growing problems of congested roads and traffic bottlenecks are only short sighted band-aids on the symptom. We have lost complete sight of the disease and the drug that we are providing is only adding fuel to the fire. The problem, we need to realise, is not a shortage of road space or width but the astronomically growing number of vehicles.

While no effort is being made to reduce these, huge investments continue to be thrust into creating more infrastructure as a mindless clamour for even more, out-shouts all other voices and suggestions of saner solutions. While there is some recognition now of the need for better public transport systems, the focus continues to be on the hugely capital intensive metro rail systems like the one proposed in Bangalore and Hyderabad. This, even as existing metropolitan bus services continue to languish with little or no additional investment and a quality of service that can only be considered poor. The efficiency and the value of supporting and augmenting existing services is best illustrated by Mumbai’s Bombay Electric and Suburban Transport (BEST) service. The BEST, it is said, carries about 50 per cent of Mumbai’s total road users, yet occupies only 4 per cent of the city’s road space.

More roads is not the solution
In line with the logic that growth in vehicle population is non-negotiable and questioning it amounts to sacrilege, the single biggest activity in our cities in recent times has been road and flyover construction and road widening. Trees, footpaths, old shops, houses – nothing matters. Conservative estimates suggest, for instance, that in Pune alone, at least 50,000 trees have been chopped down in the last five years alone, many to accommodate the increasing traffic. Pedestrian and cyclists occupy minimum road space and cause no pollution at all, but that is of no consequence. By cutting trees and reducing (even eliminating) footpaths, the situation is only being made more hostile for them. An excellent example of this is the construction of grade separators and the huge expansion of road width on the highway in the suburbs of Pune where I live. While motorists are delighted for obvious reasons, others, particularly those who walk or use cycles have been completely forgotten. There are a number of sections in this stretch where one has to take a detour of at least a couple of kilometers to just cross over to the other side. Twenty minutes of driving time saved for a motorist has directly translated to at least twice the duration of travel time for a pedestrian. School children and old people, in fact, suffer the most.

The recently published nation-wide study on ‘Traffic and Transportation Policies and Strategies in Urban Areas in India’ that was commissioned by the Union Ministry for Urban Development provides some shocking statistics and evidence of this. Mumbai sees an unbelieveable 22,000 road accidents every year. Ten people on an average are killed every day in our metros in road accidents. Delhi tops the list with more than 2000 deaths per year followed by Hyderabad (1196 deaths) and Bangalore (833 deaths). Even smaller towns like Hubli-Dharwad report more than one death every alternate day in road accidents. The report points out, that a majority of the road accident victims are indeed pedestrians – something that is not difficult to understand when one sees that the percentage of roads with pedestrian footpaths is less than 30 per cent in most of our cities today.

A pedestrian first
We should remember that every citizen, even a vehicle owner, is also a pedestrian at some point in his or her use of the roads of a city. Unless priorities in urban planning, in the media and in our thinking are not refocused, this problem is bound to increase. Merely adding and widening roads is not going to help. What is needed is a more fundamental effort at improving public transport, reducing private vehicles and putting the welfare and safety of the pedestrian and cyclist at the very centre of all that we do.

Otherwise, average city traffic speed will continue to fall and yet, more pedestrians will continue to die. The most frightening part is that it could be any one of us, at any point of time.

The author is an independent journalist and photographer and is associated with the environmental action group, Kalpavriksh. He can be reached at psekhsaria@gmail.com. 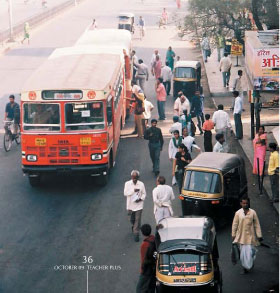 Posted by PANKAJ SEKHSARIA at 10:30 PM