Trouble Down this road

The Hindu, June 10, 2007
MEENA GUPTA
The Andaman Trunk Road, a boon for settlers on the island, could be the death-knell for the Jarawas. But little is being done to protect the Stone Age tribe from contact with the 21st century.
http://www.hindu.com/mag/2007/06/10/stories/2007061050090100.htm
THE deprivation of a name, the loss of a homeland, the extinction of a tribe — this seems to be the ominous progression of one of the oldest extant hunter-gatherer tribes in India, indeed, possibly, in the whole world. ‘Ang’ is what they call themselves, but the world knows them as the Jarawa, the Palaeolithic tribe that lives deep in the jungles of the Andaman Islands. The word ‘Jarawa’, in the language of the Great Andamanese (another Stone Age tribe of the Andamans) means ‘the stranger’ or ‘the outsider’. To the Andamanese, the Jarawa were outsiders; a different people, albeit of the same Negrito stock and inhabiting the same islands. It is unfortunate that this name — rather than Ang meaning ‘humans’, which the Jarawa use for themselves — should become the name by which we know them.
TOTAL ISOLATION
The Jarawa are one of the five Stone Age tribes of the Andaman and Nicobar Islands, which have lived in almost total isolation in the dense tropical forests of the islands, and have survived virtually unchanged up to modern times. They are hunter-gatherers, who do not practise even rudimentary agriculture, wear no clothes, shun contact with outsiders, and are fiercely independent. Their physical appearance — dark, almost ebony skin, closely curled woolly hair, and negrito features — are quite distinct from the population that originates from the Indian mainland and mark them as a race apart. Because of their small numbers (240 persons as per the 2001 census, 317 persons as reported by the Andaman administration in 2007) and their being nomadic deep forest dwellers, they are virtually unknown as a community to the rest of India and are only a name even to the inhabitants of the islands. The plight of the Jarawa has, in recent years, generated a lot of interest because of an almost sudden change in their behaviour in the late 1990s — from avoiding all contact with the outsider to actively seeking such contact. This change, which began in 1997, has heightened their vulnerability and threatened their way of life. The single activity that has had the most significant, and adverse, impact on the lives of the Jarawa is the construction of the Andaman Trunk Road. Running in a south-north direction from Port Blair, the administrative headquarters in South Andaman to Maya Bunder in the north, the ATR was started in 1958 with the very laudable intention of linking Port Blair with the several settlements scattered in the middle and north of the Andaman Islands. These settlements, which consisted entirely of people who migrated from the mainland (refugees from erstwhile East Pakistan, other people who had migrated in search of better opportunities, descendants of convicts and jailors brought by the British) were either consciously established by the administration or, more rarely, had sprung up on their own. Established at great human and financial cost, they are now flourishing habitations, with the people conscious and vociferous about their rights. Before the construction of the Andaman Trunk Road, these habitations were connected to Port Blair (and to the mainland) only by sea routes. With the completion of the ATR (an endeavour that took approximately 40 years), a direct and unimaginably convenient land link was established between the settlements and Port Blair. The trouble was that the ATR sliced right through territory that was, until then, the exclusive and undisturbed preserve of the Stone Age, hunter-gatherer Jarawa tribe. In fact it was because this territory was, by and large, undisturbed that the Jarawa had been able to survive with their way of life almost unchanged over centuries. The incursion into their territory, through the means of the ATR, exposed them to modern civilisation and its baneful influences like tobacco, alcohol, unfamiliar foods and diseases against which they had no immunity, which could together take them to the brink of extinction. What was a boon for the settlers, therefore, could very easily sound the death knell for the Jarawa.Alarm bells about the impact of the ATR on the Jarawa should have started ringing long ago. When the road first started, sensibilities about the environment and human rights and the different rights of tribals were low. Therefore creating a road through someone else’s homeland, destroying virgin forests was not a matter of great concern.

OPPOSITION
But over the 40 years or so it took to construct the ATR, consciousness of environmental issues and human rights has grown by leaps and bounds. However when the rights of a tiny group of people clashes with those of a much larger one, it is usually the more clamorous and stronger voice that is heard. And that is what has happened in the case of the ATR. There was certainly no dearth of opposition from the Jarawa. Starting with the killing of the labourers building the road, to shooting with bow and arrows at buses and other vehicles when they started to ply on the road, the Jarawa made their objection to the violation of their homeland and space quite clear. That the administration continued with their efforts could be seen as an act of valour and determination in the face of odds or callousness and insensitivity towards the rights of weaker people depending on the point of view. The Jarawa became the subject of a public interest litigation (PIL) in the Calcutta High Court in the 1990s with the High Court issuing an order to frame a policy for the Jarawa. The Jarawa Policy was prepared as a consequence, in consultation with a number of experts, and was adopted on December 21, 2004. The Jarawa Policy dwells not inconsiderably on the ATR and its impact on the Jarawa. It recommends, among other things, that the traffic on the road be restricted to essential purposes (which have been specified) and allowed to move only during restricted hours and in convoys. It repeatedly stresses that all manner of interaction between the Jarawa and the travellers, particularly tourists, be prevented. Very importantly, the policy talks of encouraging and strengthening facilities for travel by boat and ship. The policy also talks of removing encroachments in the Jarawa territory on priority basis, and ensuring that no such encroachment of non-tribals take place.

NO IMPLEMENTATION
In the two and a half years since the Jarawa policy has come into being, little has been done to implement its recommendations, particularly the more difficult ones. In defence of the administration, it must be pointed out that the inaction was not, perhaps, deliberate. The Jarawa policy was adopted on December 21, 2004. Just five days later, on December 26, the devastating tsunami struck the islands. The Jarawa were not affected by the tsunami, so the administration, whose entire attention got diverted to the affected areas, had little time to think of the Jarawa, apart from verifying that they had not suffered any loss. The Jarawa policy has thus remained, by and large unimplemented. No attempt has been made to explore alternate sea routes to link the places that the ATR goes to. Little effort has been made to curtail the number of vehicles plying on the road. The average number of vehicles plying on the ATR annually shows a steep increase from 17,179 in 2001 to 35,798 in 2006. The number is poised to exceed 40,000 in 2007. Convoys of vehicles leave eight times a day from Jirkatang and Middle Strait — the two opposite ends of the portion of the ATR that runs through the Jarawa reserve — with an average of 120 vehicles per day. And despite explicit stipulations of no contact with the Jarawa, vehicles conveniently break down or stop on one pretext or the other on the portion of the road inside the Jarawa reserve to allow tourists to see and sometimes interact with the Jarawa. The subject of the Jarawa was again studied by a sub-group of experts and officials, set up in January, 2006 by the National Advisory Council, to examine inter alia institutional arrangements for protecting the Jarawa and to suggest various measures to ensure greater protection. By January 2006, the Jarawa policy adopted in December 2004 had not had a fair chance at implementation. Just a year had passed, and the tsunami and its aftermath had grabbed all attention and resources. The sub-group studied various aspects including the notified Jarawa policy and its implementation and made several recommendations. Regarding the ATR, it has suggested that the portion that runs through the Jarawa reserve eventually be closed, after alternate arrangements for transportation by sea or air were put in place. This means a further delay since very little action has been taken to explore other arrangements. Unless a firm decision to close the ATR (i.e. the portion inside the Jarawa reserve) is taken, the administration will continue to drag its feet on alternate routes.

OTHER ALTERNATIVES
Despite the Supreme Court having taken such a decision in 2002, the administration has filed a review petition, which is yet to be finalised. It is easily forgotten that before the completion of the ATR (which is fairly recent), sea routes were the only alternative. Even today, for all other islands, e.g. Car Nicobar, Havelock, Great Nicobar, other islands of the Nicobar group, Little Andaman and many others, transportation is only by boat or ship and, very occasionally, by helicopter. Therefore the people living in North and Middle Andaman can hardly claim that they will be specially inconvenienced. Almost all the officials who work or have worked closely with the Jarawa, whether of the Andaman administration or the Andaman Adim Janjati Vikas Samiti, a registered society set up to look after matters relating to primitive tribes, privately aver that closure of the ATR is essential to reduce contact with the Jarawa and protect them from abrupt induction into the 21st century. However, other officials strongly claim that closure of the ATR, even a portion of it, is impossible since it is a lifeline for the northern settlements. The attitude of these latter officials is understandable, but unsupportable, if one keeps the future of the Jarawa in mind. It is apparent they are thinking not of the Jarawa but of the other inhabitants. For these inhabitants, other alternatives are, or can be, made available. For the Jarawa, who virtually have their backs against the wall, there is no alternative, and time is fast running out. 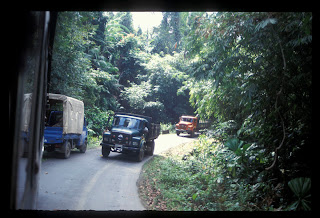 Traffic on the Andaman Trunk Road inside the Jarawa Reserve. Photo: Pankaj Sekhsaria, 2003
Posted by PANKAJ SEKHSARIA at 12:18 PM