THE HINDU SURVEY OF THE ENVIRONMENT - 2009

One of the biggest concerns about scientific research over the years has been its ‘inaccessibility to common people’ and often, the ivory tower disposition of the scientific community itself. Debates over the lack of accountability in scientific establishments and their general unwillingness to engage with the masses have been common. Admittedly, all scientific endeavours don’t lend themselves to easy explanations, but that does not mean that none do.

A WORLDWIDE PHENOMENON
The fields of ecology and conservation, in particular, have been those where common citizens have contributed significantly with their keen interest and passion for the subject of their interest, be it birds, butterflies or plants, the marine environment or migration studies. Excellent examples of this abound around the world. Thousands of citizens in the USA, for instance, have joined Project BudBurst, a national field campaign for citizen scientists designed to engage the public in the collection of important climate change data based on the timing of leafing and flowering of trees and flowers. Another one that has global reach is Earthdive. Developed in partnership with the United Nations Environment Programme - World Conservation Monitoring Centre UNEP-WCMC and marine biologists from all over the world, it has a unique database (Global Dive Log) into which divers (and snorkellers) log sightings of key indicator species and human induced pressures.
They are so widespread and prominent, particularly in the west, that these citizen science initiatives have themselves become subjects of scientific and academic scrutiny. The relevance of citizen science in residential areas, for instance, is the subject of a recent paper published in the journal Ecology and Society by scientists of the Cornell Lab of Ornithology. “Citizen science”, the paper says, “is a method of integrating public outreach and scientific data collection locally, regionally, and across large geographic scales. Combining the power of the Internet with a populace of trained citizen scientists,” the paper concludes, “can provide unprecedented opportunity to mobilize a community to address new environmental problems, almost like having the environmental equivalent of a “fire brigade” ready to act as the need arises.”

CITIZEN SCIENCE IN INDIA
One of the first such attempts of Citizen Science in India is the nearly two decades old Asian Waterfowl Census (AWC). As part of the effort hundreds of volunteers and enthusiasts visit wetlands across the subcontinents on pre-decided dates in the winter season to count and then report the number of individuals of each species of waterfowl that they encounter. It was a simple idea that gave a good sense of bird numbers and trends, particularly, in wetlands that were visited and monitored regularly by the volunteers. For long this appeared to be the only effort of its kind, but now others have also taken off. 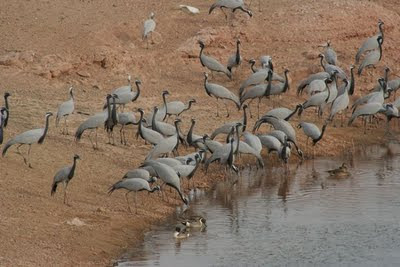 Demoiselle Cranes and some Northern Pintails in Rajasthan – The birds are prominent winter migrants to the Indian Subcontinent. (Pic by Pankaj Sekhsaria)
One initiative that has caught on really well is MigrantWatch, a citizen science programme for bird migration housed in the National Centre for Biological Sciences (NCBS) in Bangalore and being executed with the help of Indian Birds, a journal published from Hyderabad. Over 700 amateurs, serious researchers and weekend enthusiasts from across the length and breadth of the country are already part of the effort that seeks to document, understand and analyse the phenomenon of bird migration. Over 2500 first sightings of over 170 species have been logged since August 2007 and inputs are pouring in with every passing day. “The data gathered over the years,” says Uttara Mendiratta, a co-ordinator of MigrantWatch, “will help us examine the effects of climate change on the timing of bird migration in the subcontinent.”
Bird studies, in fact, easily lend themselves to initiatives of this kind and some of the most significant contributions towards understanding birds in India have indeed come from the enthusiastic amateur. What is significant this time is that the program is well thought out, structured tightly, and like in the west, is using the internet as a critical tool to put everything together.
The team at NCBS is also currently preparing to launch an India version of Project BudBurst to monitor plant (mostly tree) flowering and fruiting with the help of volunteers in another effort to understand impacts of climate change.
“It is not uncommon,” explains Mendiratta, “to hear anecdotal references from various people that plants have now started to flower and fruit at unusual times of the year. Recent information, for instance, reflects some concern about the early flowering of Cassia fistula in Kerala as this could result in the unavailability of the flowers during the festive season in April. The project,” she continues, “will be able to confirm such changes over the years using simple data collected by the volunteers.” 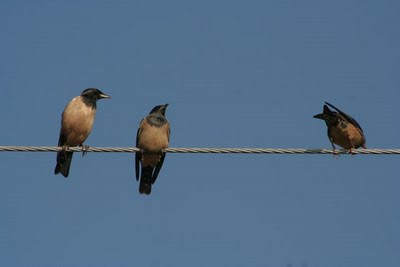 Rosy starlings and a myna, Kutch, Gujarat. The starlings were in the first list of birds being studied as part of the MigrantWatch program (Pic: Pankaj Sekhsaria)
PTEROCOUNT 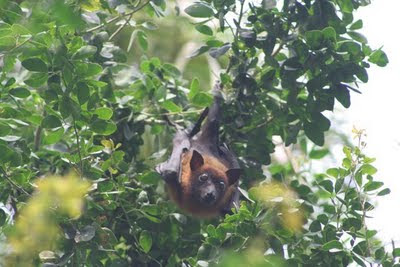 Fruit bat in a roost in Bhuj Town, Gujarat (Pic: Pankaj Sekhsaria)
One of the other endeavors, that has been up and running for a while is Project PteroCount, a South Asian Bat Monitoring Project that seeks to form a wide network of volunteers to create a comprehensive database of the roosting sites of the Indian Flying Fox, one of the largest fruit bats in the world. Started in 2005, this program has a modest volunteer base of about 75 people who have been gathering population and roost information and trends from 14 states across the country and also in Nepal. Dr. Sanjay Molur of the Coimbatore based Zoo Outreach Organisation was played a key role in starting this initiative. “We have some interesting information,” he says, “that has been coming through. The program has also benefited students from Tamil Nadu and Karnataka to create a focus in studying these creatures. One PteroCount volunteer,” he continues, “has now registered for a PhD on bat studies and a veterinarian from Himachal has managed to get a set of her own friends interested in observing the bat roosts. And,” he adds, “we are also in the process of starting a similar initiative to study spiders.” 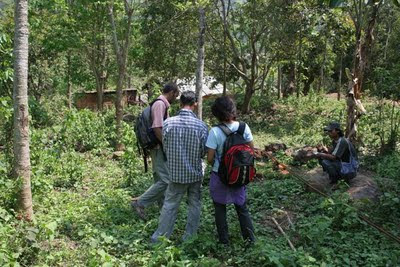 Staff of the Samrakshan Trust in the field noting down GPS readings and other details of elephants sightings from village folk (Pic: Pankaj Sekhsaria)
Another program that has yielded some noteworthy results is a little initiative tucked away in Meghalaya in the North Eastern corner of the country. This is a project of the Samrakshan Trust to involve local people in monitoring elephant movement in the South Garo Hills, which is part of the Garo Hills Elephant Reserve. It is considered to be one of the most significant elephant bearing areas in the country but little is known of elephant behaviour here. In a situation where the landscape is large, where human and financial resources are seriously limited, and the area extremely difficult to access, it makes perfect sense to involve the local community. The elephant monitoring project here has done just that. For about three years now, a network of local individuals situated in remote and dispersed villages has been trained to collect data on elephant presence and movement in a simple and structured manner. The data has just been put together and it has created for the first time a good overview picture of the elephants here; including aspects like herd size and the general direction and period of their movements. Additionally, the study has provided some important insights into other dimensions like crop raiding by the elephants. It is, perhaps the first crucial step in understanding and perhaps solving the escalating problem of human-elephant conflict, and for ensuring a better future for both, the local communities and the elephant.
These examples provide the proof that science need not be distant, that it can be made meaningful with and for people and it can still be just as exciting. Needless to say, the involvement of the local communities should not be restricted to only those situations where the going is tough or where getting data is difficult. “It is crucial,” the Samrakshan research team points out in the latest issue of the journal Current Trends in Tropical Biodiversity Research and Conservation, “that the monitoring exercise contributes to local understanding and empowerment, and not simply to the satisfaction of the scientists and planners. The monitoring and evaluation process needs to ensure that there is adequate feedback into the local information system and the data involved is of mutual importance to researchers and locals.”
Citizen Science for Conservation is only just starting in India, but it does look like it has been a good take off. There will, hopefully, be many more in the years to come!

As a citizen, let me state that citizen science succeeds only where I, the citizen, am not only considered a stakeholder but also given due rights to the information I help gather. When I add to Migrant Watch, it allows me access to the data. Whether I chose to use it or not is my prerogative but its availability makes me a participant. So MigranyWatch is 'good' citizen science.

But if the data which I collected or helped collect is reserved and not available to me for my perusal and use, such a citizen science program is suspect.

In all the examples you cited, it is not clear as to how the projects treat the participant. Is he a volunteer who receives perfunctory thanks and some hypothetical value from the ultimate results of the endeavour or does he get something that he feels is tangible and of value to him. American citizen science schemes give free guide-books, special training, membership and privileges in organisations and in one case, even tax-breaks.

The common man has always wanted to help out right from three decades ago when I was a young naturalist. It is the failure of institutions and their citizen science initiatives to make the common man's contribution worthwhile in terms of partnership, ownership or perceived return value. In the end, these attempts were seen as
getting free work done but not giving enough back which led to the failure of the schemes.

If citizen science initiatives are to be successful, they need good budgets for outreach and providing a suitable vehicle which gives 'happiness/bhaav/return value' to the common guy participating. Then and then alone will it take off.

One of the key methods of giving return value is to give access to the data immediately as they are fed in for the user with a suitable free license for his use. There are other methods too.

If this consideration of returning value to the participants is not a keystone of such Indian citizen science projects, let me forecast for you and for free their untimely demise in due course in the future.