The tiger, the deer and the tourist

Picture and Text by my good friend Aditya Laghate.
This image from Aditya won the 3rd prize in the Sanctuary Wildlife Photography contest 2008 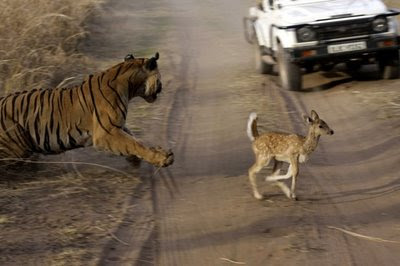 Dark grey clouds were looming over the forest. It was pin drop silent! We entered the Bandhavgad Tiger Reserve with no hope. As we drove slowly on the assigned route, we stopped the gypsy only once to show my campers, 3 Grey Hornbills on a distant tree top. Hope of seeing anything was at a record low! Two small kids with me fell asleep, two uncles & my younger brother were stiff bored. No wind, no bird call, nothing!!

Slowly our gypsy rolled down the slope from where we approached the Rajbehera Meadow. As we came close, we saw a Jackal jumping at the edge on the road near the grass. A sudden rush of excitement to see something in a dead forest, took out our binoculars and examined the area. Our hearts started pounding hard by what we saw. The Jackals had managed to isolate a Spotted Deer Fawn from the heard and were about to make the hunt. On the far edge we saw another Jackal walking towards the fawn. We waited with bated breath wondering what will happen next.

As we were watching in front, our guide softly said, "Tiger..." and we turned around to see the huge Rajbehera male appear from the nala. It was double excitement! I was wondering will the tiger come towards the fawn and the jackal, what will happen when the three confront each other! But as I again turned around to see what was happening with our Jackal and Deer, the Jackal had done the vanishing act! But the fawn was still there standing in a paralysed state.

The Tiger, a fully fed male, with still traces of blood on his face and limbs walked slowly in the meadow and approached a deer herd standing at a distance. The herd, on seeing the tiger ran away. The tiger then started waking towards the gypsy. The tiger was not aware of the deer fawn standing near us, as it was completely hidden by the dry grass.

As the tiger approached us, it saw the deer fawn and ran to capture it. What ensured in front of us was a rare chance of seeing a tiger on the hunt!

During this entire episode,there were only three vehicles at the meadow. One was ours and two of them were van rented by a television crew, claimed to be from Discovery Channel by the guide and driver. One of the vehicles had the filiming crew and the other was the pilot vehicle. The two television vehicles were at the far end of the meadow and had not seen or realised abt the tiger coming out in the meadow. On seeing the herd of Spotted Deer running out the meadow, they realised that the Tiger was on the scene.

The television crew it seems were waiting for two or three days to film this huge male, but were not getting a chance. The pilot gypsy, seen in the picture, was rushing at the scene un-aware of the drama un-folding there. They wanted to stop the tiger from getting into the thicket on the other side of the road. As the vehicle approached us, visual signals from us were not good enough for them to stop. In the photo it can be seen how the tiger was distracted by a moving vehicle, which just managed to screech to a halt!

The photo is a visual proof of how tourism is adding pressure on the forest inhabitants. I would have loved to take this story to the forest officials, but due to inadequate proof, I cannot support all my claims.

I will sum up the entire episode as Sanctuary Asia puts it, "There was no cruelty involved*. In the Jungle, the law is simple - eat or be eaten"