President Smt. Pratibha Patil planting a casuarina sapling at Wandoor where the A&N admin cut down scores of trees for her visit there. (Photo: Press Information Bureau) 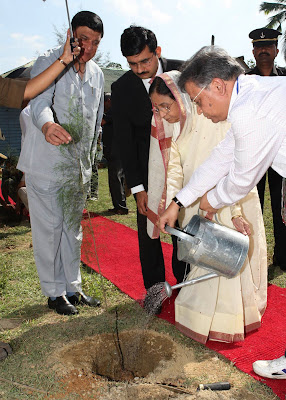 Apropos the news item appearing in the Indian Express and the Andaman Express dated 27.12.2007 it is to be clarified in this connection that on the basis of the report received from the local Air Force Authorities requiring clearance of obstacles including trees in the funnel area of Wandoor helipad, the Department of Environment & Forests has given no objection to Andaman PWD to remove and to prune some trees to provide safe and free movement of VVIP helicopter at Wandoor Helipad. Cutting of these trees will not create any environmental damage as these trees are Casuarina species which were planted in the past primarily to beautify the beach. However, some trees to be pruned and very few trees coming coming within the funnel area had to be removed for safe landing and take-off of the VVIP helicopter. Felling of these trees do not attract the provisions of the Forest Conservation Act 1980. In replacement of trees removed, the Forest Department will undertake planting suitable species in the blank areas.
As regards other reports relating to cutting of large number of trees in Havelock Island and Port Blair Municipal area, it is to clarify that not a single tree has been cut; only pruning of branches of avenue trees has been carried out wherever it is needed for reasons of the security of the VVIP, says a press note issued by the A&N Administration here today.
Posted by PANKAJ SEKHSARIA at 9:37 AM