PROCEEDINGS OF THE JOURNAL CENTENARY SEMINAR,

The Andamans has four tribal reserves, one each in the name of its negrito communities; the Great Andamanese, the Onge, the Jarawa and the Sentinelese. They were created under the Andaman and Nicobar Protection of Aboriginal Tribes Regulation (ANPATR) - 1956, and cover an area of nearly 1,500 sq. km, 25% of the . The largest chunk here is the 700 sq. km Jarawa Reserve followed by the 520 sq. km Ian Onge Reserve on Little Andaman Island. Additionally, 3-5 km of the sea adjoining these land areas, too have been protected as tribal reserves: marine protected areas that are yet to be measured, but could easily be a couple of 1,000 sq. km. Significantly and unlike PAs such as Interview Island the forests of the tribal reserves have never ever been subjected to any kind of extractive, exploitative, or destructive activity. The sole inhabitants of these reserves are the hunter-gatherer, forest dwelling communities that have lived in complete harmony and equilibrium with these forests for thousands of years. If undisturbed, these pristine areas are crucial for long term conservation and the maintenance of viable gene pools, the importance of these Tribal Reserves cannot be emphasised enough. This paper is about the alone, though by extension it is very easily applicable in the Nicobars too. In fact 100 % of the 1800 odd sq. km of the have been designated as tribal reserves. 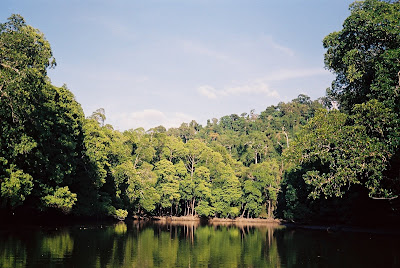 THE are a land where some of the best forests are those that are protected for and in the name of human communities. These are the hotspots within the hotspot; substantial chunks of tropical rainforests that have never been subjected to development or commercial threats; repositories of biological wealth that have never been surveyed, let alone documented. Here are the beaches on which endangered sea turtles have been nesting for aeons and also the creeks and the mangroves where the endangered Saltwater Crocodiles (Crocodylus porosus) still survive in significant numbers. The forests here are home to innumerable species of plants and animals, including endemics like the Andaman Day Gecko (Phelsuma andamanense), the Andaman Serpent-Eagle (Spilornis elgini), the Andaman Teal (Anas gibberifrons) and the Andaman Wild Pig. 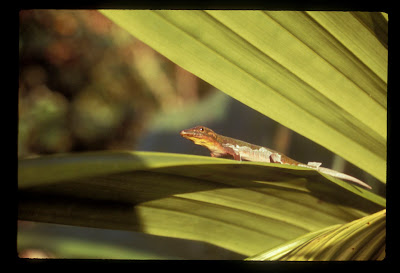 The latter two are extremely threatened and the Andaman Teal, in fact, is considered amongst the rarest of ducks in the world. These forests, importantly, are also home to a set of remarkable, but very vulnerable and threatened human communities. Put together, one is talking of a landscape that is a repository of a priceless natural and human heritage rolled into one. The areas in question are the four tribal reserves, one each in the name of the four negrito communities of the Andamans: the Great Andamanese, the Onge, the Jarawa and the Sentinelese; all created in the late 1950s under the Andaman and Nicobar Protection of Aboriginal Tribes Regulation (ANPATR)- 1956. The Jarawa Reserve covers more than 700 sq. km on South and Middle Andaman Islands; the Onge Reserve is spread over 520 sq. km on the of ; and the entire of about 50 sq. km is reserved exclusively for the Sentinelese. Put together they constitute nearly 20% of the 6500 odd sq. km of the total land in the Andamans and protect within them the finest forests and biodiversity that the islands support. At least 3-5 km of the sea adjoining these forests too have been protected as tribal reserves: marine protected areas that are nearly 1000 sq. km in their spread. This is, in fact, the only legal protection accorded to the coral reefs found off the western coast of the Jarawa Reserve. These are considered to be among the finest reefs in the Andamans and till date no one has surveyed or studied them in great detail.

It is also significant to note that large areas of forests in the islands, including those that are wildlife sanctuaries and national parks today, have been exploited for timber at some point in the last 100 years of continued extraction operations here. Not the forests of the tribal reserves though, primarily, because the indigenous communities never allowed any such extractive and extremely destructive uses of their forest homes. In the conflict ridden conservation landscape of the country, here is an example where the needs of biological and environmental conservation and those of human communities overlap neatly. The negrito communities in the Andamans have lived in harmony with their forests and natural resources for a few thousand years. However, if one looks at the history of these islands over the last four decades or so, one gets a completely different picture. When first created in the 1950s, the tribal reserves were, in fact, much larger than what they are today. In the 1970s substantial chunks of the tribal reserves were denotified to facilitate the process of the colonisation of these lands by populations from mainland and for the exploitation of valuable resources, primarily timber.

This was the ideal recipe for the destruction of the forests and history is witness to this fact. Two denotifications in the 1970s took away about 200 sq. km of pristine forests from the Onge Reserve and turned it over for clear felling, settling of people from mainland India, timber extraction and the creation of plantations and agricultural fields. Similarly, the pristine Jarawa Reserve too was reduced to allow timber operations and the construction of the Andaman Trunk Road (ATR). 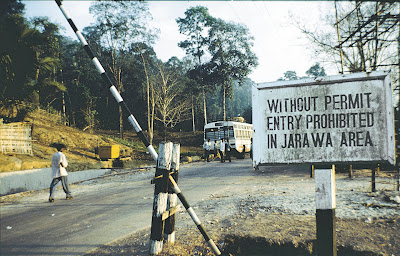 At Jirkatang, where the ATR enters the Jarawa Tribal Reserve, A 1998 photo 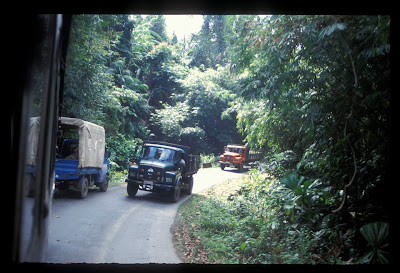 The eastern side of the road was then handed over for large scale timber extraction operations. The consequences are visible for all to see. The canopy and the evergreen character in this denotified part is gone, the Andaman Wild Pig, the largest mammal in the islands is found here no more, aggressive aliens that thrive in deciduous and dry conditions are taking over, sea turtles can no longer nest on beaches as sand has been mined away, coral reefs in the adjoining oceans have been physically affected and also choked by erosion, groundwater acquifiers have been depleted and the hydrological cycle has been adversely impacted.

Towards the west, separated by the ATR, lie the forests that are still protected as the Jarawa Reserve. One has to only stand on this ATR and look either way. On one hand, we see how the Jarawa use and protect their forests. On the other side, is evidence of the destruction that we have wrought upon this fragile and priceless forest ecosystem. If left undisturbed, these large pristine areas are crucial for long term conservation and the maintenance of viable gene pools, the importance of these Tribal Reserves cannot be emphasised enough (See Appendix 1). It does not take much to realise that the indigenous communities have little, if any impact at all, on these forests. They are the ones who have protected these forests from being destroyed by the outside world. What is critical to understand in this context then, is that the survival of these communities is as critically dependant on the forests, as the forests themselves are dependant on the indigenous communities. These tribal cultures and societies are intricately linked with the forests and it is they who have ensured their complete protection and conservation. Lands that are being protected in the name of and for the indigenous peoples in these islands are as important, probably more important, than the officially designated system for the protection of the biological wealth here. Only, ‘protection’ will have to be defined and understood differently from how we do it presently. This protection is not being accorded from the outside, as it happens in all PAs. Here it is these people who are protecting themselves and their forests from extremely destructive external forces. The concept of ‘threat’, then, just like that of protection, too needs to be redefined. Here it is the tribal people and their forests that are threatened by the outside world. The populations of forest dwelling hunter-gatherer communities are never very large, but they need a basic minimum area for subsistence. The same has always been true of the Andaman negritos. A massive colonisation scheme in which thousands of mainland families were settled in the islands has over the years completely skewed the balance against the interests of the tribals. While the population of all the negrito communities in the islands is only about 500 individuals, that of the outsiders has climbed to nearly 4,00,000. The pressure that these people exert on the forests resources like fresh water and the indigenous people themselves can well be imagined. 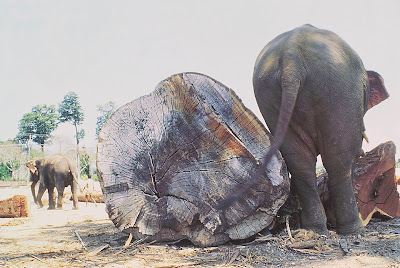 In the timber yard at Hut Bay, Little Andaman Island, the home of the Onge. A 1998 picture 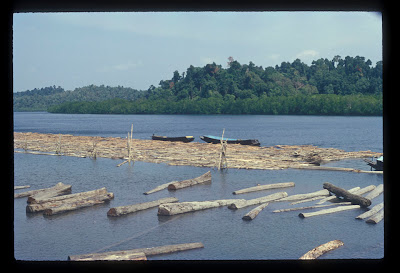 It is also not just the physical destruction of the forests and the take over of tribal lands that is threatening these communities. The dominant civilisation does not even try to understand, let alone respect the culture, the way of life and the system of knowledge of these people. Communities like the Jarawa take just as much as they need, achieving a system that is probably as close to one of balance and equilibrium as one can think of. Their needs are limited and therefore the exploitation of the forests and the resources by them is limited.

A recent, preliminary study has revealed that the Jarawa have knowledge of about 150 species of plants and trees and over 350 species of fauna. Many of these are directly used by them in their material culture, as food or as medicine. This is an excellent indicator of the knowledge that the Jarawas have, as well as that of the diversity of the forest itself. For the Jarawa, this knowledge is important if they are to ensure survival. The wider the base from which they can extract their survival needs, the better their chances. And that is where the conservation of the systems and the diversity become important as well. The same is also true of the Sentinelese and the Onge. The Jarawas, the Onge and the Sentinelese can certainly protect and save themselves and their forests, but they need some help from the outside. Not drastic intervention, not surgical incisions, but something far simpler. The tribal reserves in the islands are, without doubt, the most significant repositories of the islands biodiversity. The system for their management and protection, however, needs to be diametrically opposite to the principles and philosophies that are the basis of the protected area network of the country today. The protection of these forests and diversity cannot be divorced from the indigenous communities that live there. Their ownership and primary right over the forests has to be accepted first. That is far easier said than done, but it has to be done. Their lands and forests have to be protected at all costs, even restored to them from whom they were taken away. Cultural interaction has to be regulated, it has to be extremely sensitive and in situations, even reduced to a bare minimum. There has to be an explicit recognition of their way of life, a respect for their traditions and knowledge, and an acknowledgement that they are our most important partners in the conservation of a unique natural heritage: the forests of the .

Posted by PANKAJ SEKHSARIA at 11:56 AM